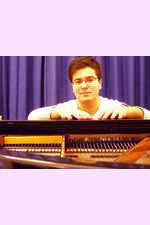 Florian Mitrea – the winner of The International Piano Contest in Vienna

Florian Mitrea is a young pianist born in Bucharest, in 1989. After graduading from George Enescu Music Highschool, during which time he won important awards at The National Music Olympics, The Ada Ulubeanu National Piano Competition and The Jeunesses Musicales Internatioanl Competition, Florian Mitrea was accepted- in 2007-with a scholarship at The Royal Academy in London, where he has been studying since September 2008.

During the spring of 2010, at professor Christopher Elton’s recommendation, the Romanian pianist, together with the violonist Yuka Ishizuka and The Academy Symphony Orchestra performed for the very first time Timothy Jones’(doctor in musicology) final version of The Concert for Piano, Violin and Orchestra by Wolfgang Amadeus Mozart.