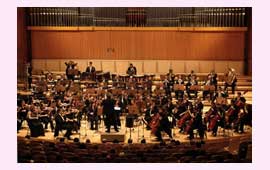 The "Little Paris" International Festival takes place in Bucharest between the 20th and the 27th of August 2010. Besides masterclasses, the event also programmed two concerts: one on the 26th of August, held by the graduates of piano, flute and orchestra conducting classes and another one taking place in partnership with the National Radio Symphony Orchestra. The "Little Paris" International Festival is organized in partnership with Music College "Dinu Lipatti" and the National University of Music Bucharest.


Here are some other details given by Florian Nemeş, headmaster of Music College "Dinu Lipatti":

"This year's edition is a bit concise. The reasons for this are financial and economical, but the quality standard remains the same. We have approximately 30 students from different countries: Germany, Austria, Iceland and Serbia. The program is diverse, with works belonging to the pre classical period up to the modern one, mostly focusing on the repertoires of the students; I am talking about children from a very early age up to sufficiently matured ages.

The concert taking place at Radio House on the 27th of August is held by the students that took the orchestra conducting classes. They will conduct the National Radio Symphony Orchestra. Here we have a few popular pieces from the international repertoire: Beethoven's Symphony no. 8, Schubert's "Unfinished" Symphony No. 8 in B minor, Mozart concert in A major for piano and orchestra. Then, in the second part of the concert, we have Brahms' symphony no. 3 and Slavonic Dances by Dvořak.

I believe that most of the students are very talented; they have the potential and the skills for repertoires. And this is a consequence of the first two editions and of the fact that the festival is becoming more and more popular."