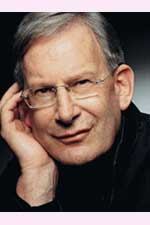 Sir John Eliot Gardiner conducted the Czech Philharmonic Orchestra at the Rudolfinum Palace on August 26, during the Dvorák's Prague Festival in a program that included The Carnival Overture and The 8th Symphony by A. Dvorák, as well as the Ballad of Blanik by Leos Janacek. Sir John Eliot Gardiner spoke in an interview by our colleagues from the Czech Radio in Prague about his passion for Czech music, and his collaboration with Sir Charles Mackerras and not only.

For a start, I would like us to talk about the work of Janacek, The Ballad of Blanick, which is seldom performed and not actually known. Why did you choose it?

I love all Janacek's music and I think it is a beautiful musical work. It relies on a famous story, a popular myth in the Czech Republic. Janacek's music is based on this story but unfortunately it is not so popular. After the first rehearsal, the Czech Philharmonic seemed to have difficulties. The next day, everything was fine. The work is, like all of Janacek's music, written in a strange, different way: one must get used to the notation, the eccentricities of the composer. Then, a very beautiful, original, lyrical, delicate music is revealed, a music which makes one feel the hero's experience of walking up the mountain and seeing how the weapons become harmless. He dreams and the music is very emotional, I find it wonderful.

What is your attitude towards Janacek? What does this composer mean to you?

It is, in my opinion, the most original Czech composer of the twentieth century. He had the biggest impact outside his country, for example in the UK. I directed three of his works: Jenůfa interpreted by the Czech Philharmonic in Salzburg in 2001, Katya Kabanova at the La Scala and The cunning little vixen at Covent Garden. On each occasion I consulted with Charles Mackerras, I asked for his advice, we analysed together the material available and I can say that I find these works extraordinary. They are so full of pain and fear, the timbre and the orchestration are very original, while the Czech language is used wonderfully. But I think that Janacek has a great rival in Martinu. Especially The sixth symphony, which I directed in February and which I will play again on Sunday, August 29th, in London, is a masterpiece. One feels in this music the composer's fragility and vulnerability, if we think of the accident he had when he fell, injured his head and became deaf. The music is full of pain and homesickness, a remarkable achievement.

You talked about Sir Charles Mackerras as your advisor. Can you can tell us more about this collaboration?

Conductors are not usually very friendly with each other, but Charles was an exception to the rule. He saw me in The Barber of Seville by Rossini in 1969, when I was just beginning my career and he chose me to direct The Magic Flute at English National Opera, as he was the Artistic Director. He offered me two performances without any rehearsal or preparation. But he trusted me, thank God it went well, so he invited me again to conduct eight performances of the Abduction from the Seraglio during the following two seasons. He became my friend and we shared many hobbies and interests in music, like the love for Handel or Mozart for instance. He used to call me when he was preparing Schumann and ask for my opinion on the interpretation of the symphonies, while I could also ask for his advice about Janacek, for example. It was a very good collegial relationship and it is very sad to say goodbye. I saw him brilliantly directing The turn of the screw by Britten at the English National Opera. Then there was the 1st of July concert at the Australia House in London, which was a sort of farewell. I was conducting in Paris, but I went to London precisely to see him, I knew that a farewell would follow. He was very ill, but he was brilliant, a great musician and a great friend.

We know Sir Charles as an expert in Czech music. What was his contribution to in British music?

I think we can say that he was never appreciated as he deserved. I think that towards the end of life he received the status of "venerable". This happens here, we tend to venerate the elderly, but he could have been appreciated earlier, and more than he was, because he was a first class opera conductor with a vast repertoire. He could have easily become the principal conductor at Covent Garden and I think it's a pity that it did not happen. He could have had any job and he would have liked. But my admiration and affection for him is somehow related to his love for Czech music, because he studied with Talich, who is the parent of a significant part of the Czech music. Charles was truly remarkable.

Going back to the concert with the Czech Philharmonic, these days you are rehearsing The 8th Symphony by Dvorak, which is certainly a tradition in what regards the interpretation. Do you intend or do you want to change this tradition?

No, what I want to do is to reveal the intrinsic qualities of the Czech style of interpretation of this orchestra, especially the sound of woodwind instruments. The public will listen especially to the woodwind instruments compartment, to the type of sound that this band can produce, which is highly individualized. It is not the old general tone you often meet in Europe, but it has its own character, which I appreciate and I want to emphasize. I only need to insist that they have the courage to be very personal and individual. It is a band that can sing very well but which needs to be encouraged and stimulated to play better in order to decrease the risk of performing below its usual standards. And I want to achieve this performance to be their first priority.

What do you think about the 8th Symphony by Dvorak, which a critic described after the premiere as resembling the Rossina style music?

I think he perceived it wrong. For me, Symphonies 7 and 8 are Dvořák's best; I find it hard to choose between them. In The 8th Symphony for example, G major is confusing, it does not start in this tone and it has a dark, melancholy side. The slow part reminds me of the Funeral March in the Heroica symphony, Part III is a kind of ländler or waltz, not a Scherzo, of an incredible charm. The trio of these movements is extremely beautiful; the variations of Part IV are full of character, sparkle and colour. My role in this Symphony is to encourage musicians to be themselves, to be individual. I need to restore a link between them because they were on holiday, they have not played together for a while and I try to get them back in good shape.

The soloist of the concert in Prague, and then of the one in London is Lars Vogt. Is this the first time you work together?

Yes, and I look forward to it.

You are putting on four concerts in this year's edition of the BBC Proms Festival. Can you tell us more about them?

Two weeks ago I interpreted all six Brandenburg concertos with the English Baroque Soloists, a huge pleasure for me. I only conducted three of them and it was a true delight for me. My last concert at the BBC Proms this season is Vespro della Beata Vergine by Monteverdi, 400 years after the first printing. It is a special work for me, a sort of 'fetish work' with which I started at BBC Proms in 1968, so very long ago, 42 years. I conducted it several times during this period, including at the Basilica San Marco in Venice. It is one of the works that I always come back again with great affection and freshness.

One more question about the BBC Proms: In my opinion, it is a great festival, but it could address the public from around the world, not just from the United Kingdom. Is it a general trend in this country that music should be supported or are there any complications from this point of view?

There are huge complications, just as in other European countries, we are currently going through a recession. There major cuts in budgets, grants and subsidies. My ensembles go through a very difficult time. BBC Proms is an extraordinary work, director Roger Wright has prepared a fantastic series of concerts this year, perhaps the most interesting edition that I listened to, given that I have been participating as a spectator since 1964-1965 and I have been directing almost each year since 1968. It is a very difficult time; some say that classical music is endangered. Just go to the BBC Proms to convince yourself that such a statement is farfetched.

To what extent does classical music in Britain depend on the support given by the state?

Key institutions such as the Opera houses and the five major orchestras in London, but also some from the province, mainly depend on state funding. An Orchestra such as English Baroque Soloists, which is an independent ensemble, receives funding from the State only occasionally, we received a "rescue package" last year and hopefully we will receive one this year. It is very delicate issue to keep going. And the system of donations by means of taxes that exists in America, for example, does not apply to us. It is very difficult to obtain charitable funds during this period, and it is the same with commercial sponsorship. We are going through very hard times, but I think we will succeed.

Translated from Czech to Romanian by Andreea Chiselev