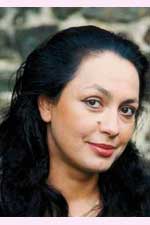 Anda Louise Bogza - on the stage of the Verona Arena

On August 25th and 28th 2010, soprano Anda Louise Bogza presented the role of Leonora in the production of Il Trovatore by Giuseppe Verdi, arranged for the Opera Festival and hosted by the Verona Arena. The Romanian musician offered to make a statement for us to talk both about the festival and the artists with which she co-worked for these performances:

"This year, The Verona Arena Festival has already reached its 88th edition. There are many performances which I can mention: Il Trovatore, Aida and Carmen.

Il Trovatore, the opera in which I perform is directed by Franco Zefirelli; in fact, all this year's performances are paying a tribute to this great director. Marco Armiliato is behind the conductor's music stand while tenor Marcelo Alvarez and baritone Dmitri Hvorostovsky are on stage.

Franco Zefirelli's contribution is really special, the stage direction is colourful and very interesting. This year's production of Il Trovatore is not this year's premiere, there were several other performances of Il Trovatore during the previous years, but I think we'll be successful this year, too as all the productions directed by Franco Zefirelli have been generally very highly acclaimed".