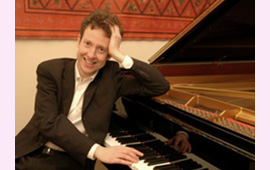 Between Music and Magic

On September, 26, 2010, British pianist Sam Haywood will be coming back to Bucharest, as he is part of the Cruciada culturii ("Culture Crusade") campaign, organized by Agenţia de Vise (The Agency of Dreams). According to the organizers, he will be performing at the Romanian Athaeneum. The program includes Barcarolle Op. 65 no. 6 in G minor by Charles Valentin Alkan, Barcarolle Op. 60 in F sharp major, Ballad no. 2 Op. 38 in F major, Ballad no. 4 Op. 52 in F minor, Scherzo Op. 31 no. 2 in B flat minor, Scherzo no.1 in B minor Op.20, Nocturne Op. 27 no. 2 in D flat major and Polonaise Op. 53 no. 6 in A flat major by Frédéric Chopin and Nocturne no. 2 in C minor by John Field, as well as Chopin's Romance in Piano Concerto no. 1 in E minor Op. 11. Before his arrival to Bucharest we had a talk with pianist Sam Haywood about his artistic biography and about the pieces that he will be performing at the Romanian Athenaeum.


The Romanian public has had the opportunity to see you, this year in May as Joshua Bell's recital partner. How would you describe this experience, your musical journey around the world with the American violinist as your partner?

It was an amazing experience, a challenge, filled with emotion and satisfaction. We will be performing yet another 35 recitals next year, because we have worked together so well and we had a wonderful experience.


The fact that you are coming back to Romania is a reason for me to believe that you had a good time here with the Romanian public.

It was great, and I cannot wait to return! The public's reaction was amazing and after the concert, I met some great people, I went out and visited the city's historic old town centre and we had dinner together on a terrace, in the warm temperature of the evening, much more different from the cool London temperature.


During your next recital, at the Romanian Athenaeum, on September 26, you will be performing many of Frédéric Chopin's works. When did you first discover the beauty of Chopin's music?

I discovered Chopin's music quite early, through Arthur Rubinstein's CDs. I fell in love with it and it has guided my entire career since. Chopin speaks to the public in such an open manner, as no other composer. I love the combination between melancholy and hope in his music, and that is why Chopin's music is so close to my heart.


When did you feel that you understood Chopin's art entirely?

I am not sure I did. It is a long process, it implies being near his music all the times. Every time I play Chopin I find something new and I think that is how it's always going to be. The way in which one perceives his music, changes all the time, as you grow older and more experienced. It is an experience one has much to gain from.


You had the amazing opportunity to play and record with the Pleyel piano, Chopin's very own piano. What did this mean for your artistic career?

This instrument, loved by Chopin, takes you to a magical world. Just by playing it, you feel closer to the composer's world, because this piano has a whole other timbre, different from today's modern instruments. It helps you see music and play it in a totally different manner. It is a warm sound covered in gold and silver. It is very difficult to describe, one must hear to understand. It is very different from today's pianos.


How do you think the Steinway piano of the Romanian Athenaeum will manage to bring to life Chopin's sound, as this piano is a modern instrument?

The Athenaeum's Steinway piano is a great instrument, it is easy to control it has a huge colour palette. I think, in a way, it is easier to play an instrument such as Steinway at the Athenaeum. Pleyel is hard work. Those who are familiar with the construction technique know that this approximately 180-year old piano does not have a dual exhaust, so if you want to press the same key twice, you have to wait until it rises to its initial position. This is not the case for modern pianos. Therefore, it feels different under the fingers. I have learned a lot about Chopin's music from my experience with the Pleyel piano.


Does the beauty of your hometown region Lake District, its romanticism, inspire you when you play Chopin?

Yes, the region always inspires me, regardless of the music I play. It is a place where I go to clear my mind, to review what I have done, to climb the hills. I have visited so many cities and met so many people, that coming here alone is very helpful and necessary for me. It is a wonderful place and I recommend it to everyone that wants see it.


Besides Frédéric Chopin, in Bucharest, you will also perform works by Charles Valentin Alkan, John Field. Do you believe the three composers share the same conceptual world?

Yes, they do, up to a point. Although they come from the same period of time, they speak different musical languages and I like to introduce some unknown works into a famous program, especially when the works are related to the program. I included Alkan because he was Chopin's neighbour in Paris and it is always nice to hear one of his Barcarolles alongside Chopin's one. It surprises the public in a good way; it is a very soft music. Field's work is also interesting, because he invented the nocturne, therefore he influenced Chopin and it is nice to put their pieces together.


During your years of training, you studied with pianist Paul Badura Skoda, who will make a tribute to Romanian pianist Dinu Lipatti through a recital held at the Besançon Festival 2010. This fall, Radio Romania Music is planning to organize a series of events that will mark the 60 years that have past since Dinu Lipatti died and I would be interested to know what pianist Sam Haywood thinks of the legendary Dinu Lipatti, great performer of Chopin.

I admire him. For me, all works played by Lipatti are like precious gems. I love them very much. They are very direct but expressive at the same time; they are very difficult to describe, but they have convinced me completely, and I like very much the recording of Chopin's Barcarolle, as well as the Sonata. His style is totally different from mine, but he has always been a source of inspiration. It is a real tragedy that he died so young.


You were also the student of Maria Curcio, a teacher for pianists Mitsuko Uchida, Pierre-Laurent Aimard, Radu Lupu and Martha Argerich as well. What is her secret?

I am not sure. I think it was a combination. First of all, her musical background was incredible. She was friends with Benjamin Britten, with all sorts of great musicians, and of course, she was the student of Artur Schnabel, who molded her. Maria is influenced a lot by the golden era of great pianists. She was a very humane person, very warm; you always felt she wanted to help you. Besides the fact that she influenced my musical life, she was a very good friend as well. She was a wonderful lady.


Mr. Sam Haywood, you are not only a pianist but a composer as well. You wrote the Penguin Song, the soundtrack for the movie March of the Penguins (La Marche de l'empereur, 2005). How was the experience?

I enjoy composing it brings me a lot of satisfaction. I have not written a lot of songs, mostly small pieces dedicated to my friends and family. I have learned a lot from this about interpreting, because you need to focus a lot on structure and on the construction of the music when you write. Although I take this very seriously, composition is not my true profession and I do not earn a lot of many out of it, but I enjoy it and I will continue practising it all my life because it is part of what means being a musician and adding elements to your career. The movie March of the Penguins is great. I met director Luc Jacquet not that long ago and he said a lot of nice things about my musical piece. It was a funny experience.


Recently, you managed an arrangement of the Romance in Chopin's Concerto no. 1. Another element added to your career…

There are several arrangements of the Romance. Probably the most popular is that of Balakirev. But, to be honest, I was a bit disappointed about it because it does not include a lot of elements from the orchestra's score. My arrangement incorporates practically everything: the texture and voices of the orchestra. I hope it will be a success, but this is for the public to decide.


Your biography states that you are an amateur magician, quite an unusual passion. How did you end up having this hobby?

Ever since I was a child I had some tricks up my sleeve. My favourite toy was a magic box and I never gave up this hobby. Many things have come and gone, but magic has always been there and I think it is a wonderful thing. It is just like music, universal, and I like surprising people. I am not extremely skilful, but I am good enough in a social situation, where people do not know each other. If you make a magic trick, you can break the ice; people will comment and will get to know each other better. It is useful.


You come to Romania as part of an extensive project called Cruciada culturii (Culture Crusade). If you could magically change something in the cultural or musical context, what would you change?

I think that there are things that, in a way, help the musical culture, but they create a different kind of culture at the same time. One of these things is the recording industry. There are so many recordings of everything that people come to expect a certain interpretation that they have heard on a recording. On the other hand, this industry brings the music closer to the large public and it is great. I believe these recordings should be made live, so you can feel the emotion, as if you were there. Many recordings are edited and I am not sure they resemble what you hear in a concert hall. Another thing would be musical contests. I am not quite sure of their power. There are so many of them, and they strive for perfection, for the fastest tempos, things that want to impress rather than to emphasize what the music has to say. On the other hand, there are many wonderful musicians who have won such contests and who have gained their popularity through them, so it is difficult to separate right from wrong, but there are things about recordings and musical contests that I do not like.