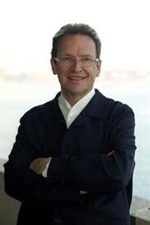 An Interview with the Composer Marc Monnet

Thursday, 27 March 2014 , ora 9.27
The composer Marc Monnet was born in Egypt, studied composition at the Paris Conservatory with Andres Salvatore and at Köln with Mauricio Kagel. He travels a lot and writes little. He initiated several artistic projects in France, and since 2003 he has been coordinating the Monte Carlo Spring Arts Festival. For the anniversary edition this year, Marc Monnet will carry the audience on a true musical journey around the world over a period of five week-ends, between 14th March and 13th April, 2014.

Mr. Marc Monnet, thank you for being our host at the Palace of Music in Monte Carlo, the place where an important festival has been taking place every spring, for 30 years. What is the significance of this event for the French music life?

It is a festival that has reached a certain age and a certain maturity. Today it has its own identity: all music genres and types can be heard in original and a little unusual forms. The audience is very interested in this anniversary, because we have also prepared special concerts.

The concerts and recitals you included on the agenda encompass a very diverse repertory, from Baroque to contemporary, world music.

Yes, because I believe that Europe has 11 centuries of written music. I wish to pore over this past, but also over the present, given that the great adventure of music goes on. It doesn’t stop and I hope it never will. I try to reveal types of music which are very different, even contrasting sometimes, not as a challenge, but on the contrary, as a way to prove to the audience the complexity of the music adventure. Every year we present portraits of composers, with monographic details. This year, the composers we portray are Alexander Scriabin and Joseph Haydn. They are two composers who have nothing in common and this was a decisive factor in our choice. Alexander Scriabin is a personality I would describe as mystique and his works are absolutely incredible. A good example is the Poem of Fire, for which he composed not only the music score, but also the light projections. He created correspondences between sound and light. On 23rd March we’ll interpret Prometheus: the Poem of Fire twice. As I was saying, Joseph Haydn is also part of the programme. I think he is one of the most inventive and surprising composers of the Classical period. Out of his creation, we’ll interpret a very rare opera, a marionette opera. He composed three, but two are unfortunately lost. Only Philemon und Baucis still exists. We’ll stage it using marionettes. Europa Galante and Fabio Biondi will join us. We included non-European music on the agenda, because I believe that we have to know both our music and the music from other parts of the world and we have to promote tolerance when it comes to perceiving other cultures, understanding other ways of thinking. So, we have an evening dedicated to Hungarian music, with works signed by Kodaly, but also contemporary ones, by Peter Eötvös and György Ligeti. For the end of the evening we included traditional music, interpreted by the Zengo ensemble. We’ll also have evenings dedicated to Japan and Morocco. Japan has a millennial, absolutely surprising culture. We have managed to invite the Kyoto Silver Pavilion, which is a Buddhist temple. There will be ikebana, tea ceremonies and other events related to Japanese traditions. So, this is how the audience will enjoy almost simultaneously the music of Joseph Haydn and another culture, where cultural codes and organization are completely different. All these come under the umbrella of the festival.

Who are the interpreters of classical music invited to this edition of the festival?

We invite European orchestras every year. I wish to bring the audience in this region as many prestigious ensembles as possible. This year we have the RAI Torino Orchestra, the Orchestra National de Lyon and we opened the festival with the Liège Royal Philharmonic; this, in order to present other interpreters. In the first concert we met a very good young violinist, Lorenzo Gatto. I believe that young interpreters should be promoted, as they will be the stars tomorrow. We had as our guest the composer and conductor Peter Eötvös, who presented an ample opus signed by Karlheinz Stockhausen: Momente, accompanied by the Radio Choir Cologne and the Monte-Carlo Philharmonic Orchestra. A special evening was that offered by the pianist Philippe Bianconi, who is better known abroad than in France; he shared the stage with your compatriot, the pianist Dana Ciocârlie. For the concert dedicated to the Baroque we invited the lutenist Rolph Lislevand, one of the best-known artists of the lute. Other guests: the pianist Frederic Francois Guy, the Parker Quartet (North America). For the portrait of Scriabin, Alexander Vedernikov will conduct the RAI Torino Orchestra and the soloist of the concerto for piano and orchestra will be Alexei Volodin. On 6th April, which is the anniversary and thus a very special day, we’ll start with an ample parade of musicians, in Place du Casino, at 17:00, organized by the Italian composer Andra Cerra. Then, the audience will enter the opera house, where they will assist at a gala concert that will last almost two hours; many artists, guests of the festival, will participate. I consider this is homage paid to our guests, because they are the ones who achieved the success of this festival. They are very different personalities, belonging to different worlds: the Zemlinsky Quartet, Blandine Rannou, the composer Francesco Filidas and many others. After this concert, in which very different performances were included, the audience will go to a famous club and the evening will end with jazz. It is an anniversary. It should be something to remember!

For this anniversary edition, you put together a unique programme, joining past and present and all meridians. You also involved many contemporary artists.

I thought that for this anniversary it was important to have an iconic event. Thus, before each concert, like a preamble, a three-minute work will be interpreted. I commissioned these works to contemporary artists, of different nationalities. This is a very complicated exercise for them. Sometimes, it is more difficult to compose a three-minute work than a thirty-minute one. The works are interpreted before each concert, symbolizing the continuity of music and of the festival.

Mr. Marc Monnet, what do you wish for this edition of the festival?

I wish for this festival to go on for a long time. This is an event which attracts audiences and artists of all nationalities. This 30th anniversary is a symbol of the continuity of the festival, of its projection into the future. I hope I’ll have very good successors, with the will to perpetuate such a quality event for 10, 20, 30 years and even more. This is one of my aims.