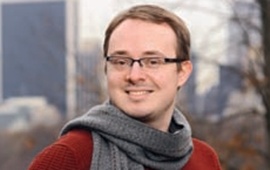 Interview with the Pianist Matei Varga

Tuesday, 1 April 2014 , ora 8.54
In the throbbing life of the New York City, there took place an event at the Hudson Guild Theatre on 28th March: it was the Swan Lake Fantasy, a project organized by Matei Varga. We talked to the pianist - who has been living in New York for quite a long time - about this project and about another important event, the Vendome Prize, of which Matei Varga is the project manager.

During an interview you gave in Romania last year, you were talking about the necessity of motivating your artistic presence in New York, where the competition was rough. Since the main topic of this interview is your new project, a renewed Swan Lake, I would like to know if you have found that Something you were looking for, that Something which interests you, and which may not be original, but which certainly proposes a recall of the famous creation?

I don′ t think I have found it, yet; if I had, then this interview would have been followed by another one for the New York Times, one for the London Telegraph and who knows how many others. Therefore, I am still looking for it. It is very difficult to be accepted at a high level, and to become a household name. So, I am still researching. Many musicians of my generation experience the same attempts, some of them even despond and think everything is in vain, but for me it isn′ t; I believe it is very important to try, not necessarily in order to succeed and reach a certain statute, but simply because this motivates you. It works for me, at least; I find new things in which I discover different means of expressions which I haven't experienced, yet, different from what I did when I was younger.

I realize that this project will be regarded as a way of discovering a new and different means of expression, but I must confess that I don′ t want the Swan Lake to be different, special or able to reveal something new or impressionable. The truth is that the Swan Lake is my favourite musical work. It may seem surprising, firstly because I am a pianist and there are so many extraordinary works for the piano; and, still, from all the piano pieces I know , I can sincerely say that the Swan Lake (obviously not a piano composition) is the work I would always listen to with pleasure.

It is an extraordinary musical work; I don′ t think I am making a compromise in the musical taste by saying that it is my favourite; however, I have always been frustrated by the fact that there isn′t (at least, this is what I know) an adaptation of this work, for the piano; not necessarily a transcription, but rather a fantasy, as Liszt did with many works by Wagner and Bellini: he kept the same topics, but created a special light, giving to the piano the chance of expressing its music and rendering it with its possibilities.

This way, it drifts away a little from what is heard from the stage, when the orchestra is playing, but it still remains in Tchaikovsky′s area, in a clear tonal language. This has always been my fantasy: to succeed in gathering different pieces from a score (of course, not a whole opera whose length is over two hours). I asked a friend, a composer from New York, that I know very well, with whom I collaborated in the past and who has a special talent for adaptations and transcriptions - I am not sure in which category I should include this work - to write to me (my name is printed right on the first page of the score) a fantasy based on the Swan Lake. My opinion is that the composer - Matt van Brink - created something very special. I was really happy with the result. The work was finished two years ago, but I wanted to take the time to pierce into it and study it. It is very difficult because, as I was saying, it is written in the Liszt-Wagner style, it is a virtuoso work, with very complicated passages. I am glad that I am ready to perform it in front of the public. This series of concerts represent the international first performance of this creation.

In the meantime, working on the score and sharing these ideas with other friends, I met a contemporary dance company - more precisely I met its director, Matthew Westerby, who was very interested and somehow motivated to drift away a little from their usual repertoire, which consists exclusively of contemporary dancing based on new music - and to try to create a work consisting of dancing overlapped on music. Practically, the piano will be in the middle of the stage and the dancers will be around it. Although Matthew Westerby usually creates the choreography only for contemporary dancing performances, he wanted to try a work based on contemporary language (there will be no tutus or swan-costumes on stage), starting from a classical score created by the composer, but remaining in the traditional area, as this is not a Swan Lake performance produced on serial music.

How is this new Swan Lake, structurally speaking? Is it structured in acts or the 25 minutes aren′t enough for them?

No, it is not structured in acts. It is interesting that, right from the first moment, I was able to tell the composer which moments I would like to adapt, and in what order. I knew right from the beginning how everything should look like, which is a good thing, because these are problems which may appear to many composers who do these types of adaptations. With this work we agreed on the beginning scene: we did not follow the original ballet order, we chose a combination of moments which was not random. But this is quite different and the public will be surprised which is a good thing.

Over this period, you are very busy not only with preparing the first performance of the Swan Lake Fantasy, but also with organizing the Vendome Prize International Piano Competition. You have been a laureate of this competition - in 2003 and 2006 - and now you are its project manager. Is it the first time you have this function?

This position is very important and it involves a lot of responsibility. The first time I occupied this function was five years ago, in 2009. I know very well the president of this competition - and, as he knows that one of my qualities is being an organized person and because I knew a lot of things about this competition - the type of pianist this competition is looking for and wants to promote - I continued the collaboration. I believe it is important for a competition to indicate some general guidelines for the participants, before it takes place, so everybody knows whether the competitions are looking for a certain personality and a certain manner of performing. Somehow, I believe I managed to do this thing and to clarify a little the type of pianist we wanted to promote. So, we started in 2009, when the finals took place at the Gulbenkian Foundation is Lisbon, and, together with Alexis Gregory, the president of the competition, we were in charge with many aspects of the competition, including those regarding the selection, decision making and jurying. I was very engaged in this competition, and this year we organize it again, but with little changes. I am very proud that, together with Alexis Gregory, we managed to catch the interest of the people involved in the Verbier Festival in Switzerland, who accepted to present the finals of the Vendome Festival. The 10 semi-finalists of the event will be brought there. Each of them will perform a mini-recital during the Verbier Festival, then the jury will choose three finalists, who will perform during the finals gala concert, during which the winner will be chosen (we only have one Grand Prize). The three of them will perform a solo programme and - a very important and unusual thing for a piano competition - also a piece of chamber music, where the three finalists will perform with the Jerusalem Quartet. Therefore, we are looking for a pianist with extraordinary technical abilities, and, as much as possible, a profound musician, versed in any collaboration. I think it is very important to highlight the importance of chamber music collaboration, as very often this thing is forgotten, and the piano competitions become a sort of car speed race. We would like, as much as possible, to avoid this thing.