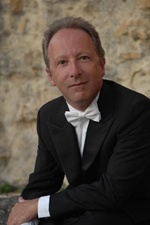 Interview with Luc Héry, Member of the French National Orchestra

Tuesday, 1 April 2014 , ora 8.47
Eight decades ago, the Minister of Post Offices and Telecommunications in France decided to found a symphonic ensemble with wage-earners, a unique event in the hexagon's cultural landscape.

Mister Luc Héry, concert master of the French symphonic ensemble, gave us an exclusive interview, offering some details from his life.

The French National Radio Orchestra is celebrating 80 years of activity. What does such a long and intense activity mean for a symphonic ensemble?

The 80th anniversary is a special one that crowns the activity of one of the oldest orchestras. None of the French orchestras has had such longevity. The orchestra was created in 1934; back then it was the Ministry of Post Offices and Telecommunications which was in authority- Jean Micheler was the Minister of Telecommunications and signed the decree through which the orchestra could function as a symphonic ensemble with wage-earners. The French National Orchestra has always been the Radio's ensemble. After World War II it received the name the French Radio Orchestra which was then changed into the French National Radio Office, and in 1974, after a presidential decree, it became the French National Orchestra, continuing its radio activity.

Which are the most important objectives of this symphonic ensemble from a repertory and artistic point of view?

The orchestra was established to develop the richness of French music. The first conductor was Emile Inghelbrecht, a good friend of Claude Debussy's. This whole tradition has been passed on from generation to generation. We continued to evaluate the French symphonic repertory from Berlioz to Dutilleux, whom we enriched with unique opuses, such as, Amériques by Edgard Varèse or Métaboles by Henri Dutilleux. It is an orchestra that, through vocation, performs a lot of French music and is the ambassador of French music in Europe and in the world.

Does the French National Orchestra have editorial projects, as well?

The recordings are fluctuating a bit because you know there is a disc crisis. In the '70s, the orchestra conducted by Jean Martinon, recorded a lot of albums containing French opuses - the entire repertory from Debussy to Ravel. There were made a lot of significant recordings and albums with Lorin Maazel. He played an important part in the French ensemble and has collaborated with it for a long period of time. Today, this activity belongs to Daniele Gatti, the music director and principal conductor, who recorded French music, and we have started a Stravinsky project with Petruşka.

Of course; for a while now, we have had a pedagogical department within the French National Orchestra, department in which many musicians are involved and develop activities in schools. These activities represent a different side of the orchestra. We have created an association named Music and Health which collaborates with several hospitals in Paris.

Mr. Luc Héry, as a young man, is it hard to become member of this ensemble?

To become a member of the French National Orchestra you have to pass an entry exam when a position is free. They have a predetermined schedule as all the other ensembles in the world have, with an eliminatory test, then a second one with the members of the orchestra, and if you pass them you will go through a probation period at the end of which you get accepted or not.

Why do we have to love the French National Orchestra, Mr. Luc Héry? Which are the reasons?

The reasons are historical, first of all. The French National Orchestra represents the pilot of the French culture like Ricardo Muti remarked when he conducted the anniversary concert. And, afterwards addressing directly to the audience, he realised that this ensemble was the ambassador of French music, and had an extremely important value. This ensemble has collaborated with the most important composers, and if you go through the orchestra's gold pages you will find the personalities that have conducted it and the important composers whoes works have been performed. I am thinking about Stravinsky who wrote his name in the gold book, or Dutilleux - who is a significant composer. There is a respect for French music which is passed on from generation to generation like a flame. I am sure that the French National Orchestra is really the pilot of French culture.