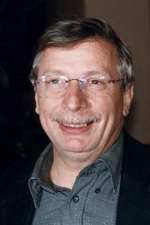 Last Friday, on 11th April, 2014, at the National University of Music, Bucharest, within the ‘Keys’ Festival, there was a conference on the topic of the work of French composer Chevalier de Saint-George, famous in the 18th century, who was forgotten and recently rediscovered. French journalist and researcher, and president of the 'Le Concert de Monsieur Saint-George' association in Paris, Alain Guédé, was the plenary speaker. The conference was run by Professor Dr. Bogdan Vodă, who conducted the ‘Concerto’ Orchestra on 11th April, in a programme which contained an opus by Chevalier de Saint-George among others.

At the end of the conference, we had a conversation with Alain Guédé, regarding the relevance of the French composer’s work with respect to today’s music.

Mr. Alain Guédé, you are one of the experts on the music of a composer who unfortunately, was forgotten – Chevalier de Saint-George. Why do you think his music is important and deserves to be known by people in the modern world?

For today’s musicians, Saint-George’s work reflects the way the world used to be back then – a combination of sources of different origins. Romanian music has also known this phase, since Romania was in the midst of various cultures, which led to stylistic richness. Saint-George’s music pertains to Classicism and it is very similar to Mozart’s music, but it was influenced by African and Italian traditions and it speaks to the heart. It is not as well structured as Mozart’s, but it can cause strong feelings, as well.

At the beginning of the conference, you mentioned that Monsieur de Saint-George’s biography could be read as an exciting novel. Which are the most relevant facts in the composer’s life?

The most important aspect of his life would probably have to be the fact that he was the son of a slave, born in the Antilles Islands, and as such, he knew human suffering, although he managed to escape it, due to his father’s fortune. Still, this part remains significant because it put a mark, not only on his childhood, but on his entire life. The second important aspect would have to be the greatness of his talent – and I must add that he was a hard worker. Saint-George was also a great swordsman. For example, it is said that he used to practise for hours, a single movement, slowly, before handling the sword   on normal speed. He studied violin with the same diligence. In the 18th century, Saint-George was the only musician in Paris who managed to draw a great deal of people  to his concerts. He was a prodigy, indeed – a match for Paganini in Italy. The third important aspect in his life was the fact that he was a serious person, a very modern character who strongly believed that a man could not feel completely accomplished until he fought for the welfare of others. This is a really touching belief for an artist. In France, people often talk about artists fighting for a cause, and Saint-George was definitely the very first of them. There were many composers who fought in the French Revolution – Gossec, Grétry – and they earned lots of money due to their participation. Saint-George, the most famous of them at that time, could have earned a great deal of money by composing songs about the French Revolution, but instead he chose to fight for the abolition of slavery and against tyranny in Europe.

You have already accomplished so much in promoting the public figure of Monsieur de Saint-George. What other plans do you have in mind to this purpose?

The first thing we did was to try to fully recompose the catalogue of his creation. When I say ‘we’, I mean the association I created, whose members are feverously working in order to rehabilitate the works and the image of the composer. At the moment, we have a few hundreds of Saint-George’s opuses, which we give for free to anyone who wants them. We do not want a barrier caused by money to interfere with the interpretation of his music. We are determined to make his work known, with the help of small, as well as important orchestras and we are glad that his music is performed more and more often. In France, most orchestras already have opuses by Saint-George in their repertoires, and in the United States, there are also many orchestras performing his work. Since we are the ones who distribute the scores, we can also keep a track for that purpose. As you know, Bogdan Vodă is one of the ambassadors of Saint George’s music, here, in Romania.

And in France, for example, the date of 10th May is the Memorial Day for the abolition of slavery, since France was an important slave state. In the presence of the country’s President, a ceremony will be developed to the tune of Saint-George’s music, performed by an Antillean native violinist. We still have plenty to do. We also created an opera about Saint-George’s life, which was often produced in France. It was directed by Petrică Ionescu and Diana Ionescu.