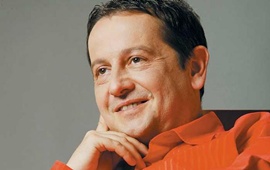 Interview with the Pianist Horia Mihail

Wednesday, 30 April 2014 , ora 11.39
The pianist Horia Mihail will perform in two recitals in New York, as part of the Travelling Piano Tour. The recitals will take place at the RCI headquarter, on 2nd May and at the Klavierhaus in New York on 4th May, respectively. Both of them will be preceded by a presentation of the Travelling Piano project, performed by the musicologist Oltea Șerban- Pârâu.

Mr Horia Mihail, in a few days, you will be in New York, to perform in two recitals. In fact, these two recitals represent a continuation of the wonderful tour, the Travelling Piano, which started many years ago. Could you give us some details about this stop-over in New York?

Indeed, on 30th April I will depart for New York, 10 years after leaving this continent for the last time. Perhaps some of your listeners don′ t know, but I lived in the USA; I not only lived, but I also worked, studied and eventually taught at Boston University, for 10 years. I could say that I return to this country with mixed feelings, because, when I left it, I was a chamber music performer, but in the last four or five years, I devoted myself almost entirely to solo music. In New York, I will perform the same programme that I presented to the Romanian public: a whole Mozart programme, two sonatas, two rondos and two fantasias. After that, I will make a short stopover in Boston - not a professional one- where I will meet my friends whom I left many years ago.

How many concerts have you performed during your career, with the aim of sharing your music with the public from all over the world?

I have lost count. I performed in about 20 concerts, both solo and accompanied by other Romanian musicians: in the Duelling Violins, George Enescu's Violin Travelling to Rural Areas, the Golden Flute tours, and long time ago, in the Romanian Piano Trio′s tours, and in the Stradivarius tours, together with Alexandru Tomescu; but all these took place in 2007, 2008 and 2010. Recently, my collaboration with the violinists Gabriel Croitoru and Liviu Prunaru, and with the flutist Ion Bogdan Ștefănescu led to many concerts in which we performed together.

What does this tour mean for the pianist Horia Mihail, in fact, this sharing of music with the world?

It is what I want to do. It is what I have felt and what I have meant since I was a child. You can′ t do music locked in an ivory tower, each experience must be alive and active. If during a concert you are not able to convey a message, then that concert shouldn′t have taken place. You must share your experience, your feelings and thoughts through an energy transfer which comes from the composer, perhaps from somewhere above, through the performer and eventually arrives to the public.