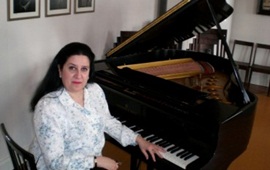 Interview with the Pianist Ilinca Dumitrescu

Wednesday, 7 May 2014 , ora 9.42
Tonight, the pianist Ilinca Dumitrescu will perform in a recital of French Musical Jewels at the Romanian Cultural Institute in Paris. The pianist’s guest is the soloist Vasile Macovei. This recital is part of a series of concerts organized by the Romanian Cultural Institute, in order to promote national creations worldwide. In 2012, Ilinca Dumitrescu received the high distinction of Chevalier de l’Ordre des Arts et Lettres from the French Government.
Good afternoon, Mrs. Ilinca Dumitrescu. You are here, in Paris, for a couple of days, performing in an extraordinary recital hosted by the Romanian Embassy and organized by the Romanian Cultural Institute in Paris. What is the occasion for this? It brings me great joy to be back in Paris. I will be performing at the Begahue Palace, which also houses the Romanian Embassy, in that marvelous theatre hall. It is a famous place in Paris, and many 19th - and 20th century important artists performed there, so it makes me very happy to return here and perform in this recital dedicated to Europe Day, occasion for which I devised a programme which includes musical jewels. This is the name I gave it, jewels composed by huge, huge artists, great European musicians, such as Domenico Scarlatti, Mozart, Beethoven, Chopin, Schumann and Camille Saint-Saëns. In the second part of the recital, I will perform, as I always do, a lot of Romanian music and that of composers who lived in Paris. I will begin with Ciprian Porumbescu, whose music I perform whenever I have the chance, and I am not ashamed to play the music composed by this amazing Romanian talent who lived in the middle of the 19th century. After that, of course, Enescu, who lived and died in Paris, Marcel Mihalovici, a great Romanian-French personality, Ion Dumitrescu, Paul Constantinescu, and I will close my recital with Doru Popovici’s famous Toccata. I would like to say that in this programme, as with many of my recitals, I have a special guest, a guest of honour, the flute soloist Vasile Macovei. I want/intend/ have planned this programme, which is quite long, almost two hours, to be an ample one, filled with jewels. I hope that the French audience and the Romanians who live in Paris will enjoy it.
This is only a short stopover in your calendar. What is next, after this ‘Musical Jewels’ recital in Paris? As soon as we return, we will perform in a recital at the Athenaeum, with an almost identical programme. Other pieces, not necessarily European, but from other cultural areas, will also be included. A week after that, I will close the Mogosoaia Festival, which is co-organized by Radio Romania. It is an admirable initiative of the Brancovian Palace Cultural Centre, but also of the Radio Broadcasting Corporation. The programme will be a special one, featuring old, European music, from Galileo Galilei’s time.
Irina Hasnaș
Translated by Valentina Bănuț and Elena Daniela Radu
MTTLC, The University of Bucharest
Return to archived Interviews