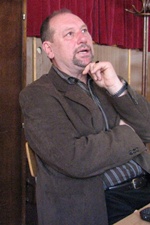 The Fourth Edition of the 'VIVA VOX' Student Opera Festival, 2014

The Fourth Edition of the ‘Viva Vox’ Student Opera Festival will take place during May 5th – 11th, 2014, under the chairmanship of Maestro Ionel Pantea and it will combine performances of the music academies of Bucharest, Cluj-Napoca, Debrecen, Iași, Jerusalem, Timișoara, Salzburg and Szeged.

Apart from the performances gave by the young artists there will also be refresher courses: Section I – presentation of the opera classes performances and Section II – mastership courses on opera, opera conducting, canto, musical journalism, cultural and artistic management. The director and initiator of this project is professor Francisc Fuchs.


Professor Francisc Fuchs, thank you for accepting our invitation this morning – when the fourth edition of the Viva Vox Festival begins – to tell us a few things about this edition.

I feel nostalgic thinking about the debut of this festival, five years ago, and about how this idea was born. Now, five years later, May the 5th is not only a national event, but an international one, too, as at the opening of the festival one of the world’s greatest tenors, Ramon  Vargas, had announced his presence; he had accepted our invitation to do us the honour of visiting the festival and meeting the talented Romanian young singers, but, for objective reasons, he had to postpone his visit. The presence of this important artist means that the renown of our festival has now reached an international level and it is known and appreciated, which brings me back to my nostalgia about the idea of universalizing the artistic-didactic activity of the opera classes. It is with great emotion that we are waiting for Ramon Vargas’s debut in Cluj. Certainly, not only us, the organisers, are waiting, but the audience, too. The opening gala of the festival will have as guests: the internationally known soprano Brigitta Kele who has made her debut in Cluj, like George Petean, our famous baritone who needs no introduction and also the tenor Marius Budoiu. The beggining of the festival will be followed by a series of concertos and recital-performances. On this fourth edition ensembles from Romania, and four other from abroad, respectively from Budapest, Szeged, Salzburg and, for the first time, Jerusalem, joined the festival. From Romania, there are ensembles from the National University of Music in Bucharest, the “George Enescu” University in Iaşi, from Timişoara and Cluj. Our guests of honour this year are Lucia Stănescu, Maria  Slătinaru Nistor, Viorica Cortez, Luminiţa Constantinescu and Marina Lewitt from Jerusalem. The president of honour is the baritone Ionel Pantea, who lives in Luxembourg at present. I would like to remind you that in the previous years, the chairmanship was coordinated by Mrs. Lucia Stănescu and Mrs. Viorica Cortez. We are excited about the presence of former and future glories of Romanian culture and lyrical stages . This year, Peter Mario Katona, the casting director of the Royal Opera House in London,  will visit us and also our well-known impresario Luisa Petrov from Rome, who has shown her interest in visiting and listening to us. On  6th  May, which is tomorrow, at 10:00, there will be an audition for a limited number of persons (20), who will be heard by the impresarios of the festival. Each university centre is allowed to delegate four singers – four from Cluj, Bucharest, Iaşi, Timişoara and two from Budapest and Jersualem. We hadn’t hoped to get here in four years, to be so visible and have so many people who want to participate, both from abroad and Romania. We hope that the event conforms to the line and conception of all the great events organised in Romania, considering that this festival in unique in Europe, through its conception, that of the student opera ensembles presenting their own performances.