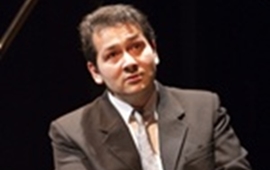 An Interview with the Pianist Ferenc Vizi

Thursday, 8 May 2014 , ora 8.57
The protagonists of 'the best classical album of 2013' campaign - the cellist Laura Buruiană and the pianist Ferenc Vizi - are giving a recital in Bucharest, at the invitation of Radio Romania Music. The event will take place in the Cerchez Hall of the Cotroceni National Museum on Thursday, 8th May, 2014, at 19:00. The programme includes both works recorded on 'the best classical album of 2013': Sonata No. 2 Op. 58 in D Major for Cello and Piano by Felix Mendelssohn, as well as opuses composed by Claude Debussy (Sonata for Cello and Piano), Gabriel Fauré (Elegy Op. 24) and George Enescu (Nocturne and Saltarello). We talked to the pianist Ferenc Vizi about this event:
Within the 'Vote for the Best Classical Album of 2013' campaign, the listeners of Radio Romania Music decided that the winner was the album comprising all the works for piano and cello by Mendelssohn, recorded by you and Laura Buruiană. This album had already received international appreciation, but what does winning an award granted by the Romanian listeners mean to you? It is an acknowledgment that moves us - it is important that, this way, music becomes open not only to experts and critics, but also to those who listen to it just for their pleasure. In the end, this is the most important objective: music should be able to touch the heart, the soul of the people who listen to it in the concert hall or in their homes. So, the fact that it was noticed and even chosen as 'the Album of the Year' brings us great joy.
What is the story of this album? It began with a meeting between Laura and me, one afternoon, when we said: 'Let's play something together!" We practically did not know each other. I had, of course, heard of the name Laura Buruiană; she had just come to France and she was living in Paris. I told her: 'Let's play something together and see how that sounds!' And we started reading some scores. The beginnings of this story lie in the pleasure of playing. It eventually led us pretty far, because it materialized into a recording project. The recording was made two years ago and now, the result is this album!
You were born in Reghin, a town where music feels at home. But this is the place where bow instruments are mainly manufactured. How come you chose the piano? Actually, the piano kind of chose me, because there was no music tradition in my family, as one might expect. It was pure chance. I am from a region where folklore is still very present and I started early in my childhood, when I was enjoying playing an instrument that has nothing to do with the piano - an accordion. And, playing in the garden from time to time, I had the chance of being heard by Mr. Beluş, the headmaster of the Music School, who said: 'This boy might have some ear for music. We should give him the opportunity to study in a music school.' Thus, I was admitted to the Music School in Reghin and, since I was used to the keyboard of the accordion, the simplest idea was: 'Why not the piano?' I have enjoyed playing onthis instrument from the first moment, the way it vibrated - to the ear, to the touch. So, I began to play the piano and I had the opportunity of meeting some wonderful people - for example, professor Andras in Reghin who helped me discover not only the instrument, but also the magic of this music. All this happened when I was about nine years old.
And how did you end up in Paris? It was the result of conjuncture. And due to a first-rate competition (in the real sense of the word): the Enescu Competition in 1991, which gave the opportunity of performing at a very high level. This was the year when Daniel Goiţi won the competition; he is an amazing pianist and I admire him a lot. I was among the participants and I had the chance of being in the finale and of being awarded a Special Prize. The 1991 jury included two French representatives - Mrs. Germaine Munier and Mr. Gèrard Frèmy - who suggested that I should try to go to Paris. Of course, that was wonderful news for me as I was living in a small town, somewhere in Transylvania. However, I followed that recommendation and I managed to be accepted at the Conservatory in Paris in 1992 and to receive a scholarship from the French government. That was the starting point for my settling down in Paris; in the end, I have got used to living here, I started giving concerts in France, so all is well.
Getting back to the topic of the album with Laura Buruiană, how did you choose Mendelssohn -his complete works? We chose him because he was a composer I knew; I used to play some of Mendelssohn's Romances sans Paroles and, at a certain point, I also discovered these sonatas. He is a composer who brings a spirit of freshness and early Romanticism; I really liked his works and I suggested to Laura that we should try to read these opuses. Fortunately, we both liked them and so, we ended up recording. In the end, we said: 'Let's record all of them!'

And soon, on 8th May, at the invitation of Radio Romania Music, you, together with Laura Buruiană, will be giving a recital at the Cotroceni Museum. You will be interpreting, of course, works belonging to 'the best classical album of 2013', but also other opuses. How did you create this programme? Of course, it was natural that the programme should be inspired by the works on the album, but we thought it would be nice to express something of the space where we are residing today - we are both living in France and we have got used to French a little. Thus, we decided to play a significant work and we thought of Debussy's Sonata; and Fauré's Elegy, as well. For me, the album is a fantastic chance, but its purpose is to be as close as possible to the atmosphere of a concert. The opportunity to play the works within a concert - and for me, especially, to play them in Romania - is wonderful; I have been living in France for the past few years and I have more chances of giving concerts there, but it is an incredible pleasure to be able to return to Romania and to be able to play for the people here. This is a special opportunity and I enjoy it very much.
Could you reveal to us some of your next projects? In September there will be the launch of a recording which was made two years ago: Beethoven's Diabelli Variations and Bagatelles, Op. 126, which are practically his last works. I will also have a programme with Spanish music, together with an artist from France. Laura and I are thinking of renewing our collaboration, which would make me very happy.
Andreea Chiselev
Translated by Mihaela Olinescu and Elena Daniela Radu
MTTLC, The University of Bucharest
Return to archived Interviews