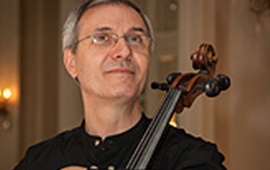 Tuesday, 24 June 2014 , ora 13.58
As a first time for any Romanian symphony ensemble, on 24th June, 2014, the Romanian Youth Orchestra is giving an extraordinary concert on the stage of the Berlin Philharmonic Hall, as the guest of honour at the European Festival of Youth Orchestras in Berlin - "Young Euro Classics".

The famous Berlin hall will be the venue where the members of the Romanian Youth Orchestra will interpret Three Romanian Dances by Theodor Rogalski, Ravel's Spanish Rhapsody, The Dance of the Seven Veils from the opera Salomé by Richard Strauss and Tchaikovsky's Symphony No. 6 in B Minor - Pathétique. Cristian Mandeal is conducting the concert. We talked to Marin Cazacu, the artistic director of the ensemble, on the day of the concert.

You are in Berlin, getting ready for the extraordinary concert on the evening of 24th June. How is the atmosphere there?

The atmosphere is enthusiastic. Last night, these young people went to the concert given by the Russian Youth Orchestra, in order to get the pulse of the event, to cherish everything that takes place on this famous stage, to become familiar with the acoustics, of course, to perceive it before creating what will happen today on the stage of this hall. There is a relaxed atmosphere. I could see that they are confident, just eager to prove that they are a very successful orchestra. I have complete faith in their forces and in what they will do this evening, the hall will certainly be packed and the audience is very warm, so this is definitely an event they will remember all their lives.

Please tell us more about the invitation to perform at the "Young Euro Classics" Festival, an invitation that you received two years ago.

It is true. Two years ago, the orchestra performed in another concert hall in Berlin - the Konzerthaus. The German press and audience were so generous that, immediately after the concert, the director of the Festival confirmed to us that the ensemble would be invited again, in two years' time. This truly happened and, more than that, it happened in the most famous concert hall in the world and in very select company. That is because only five youth orchestras in the world were selected to play on this stage: Russia, France, Romania, the United States of America and China. The presence of these amazing orchestras makes this festival have such a special status. For that matter, the message on the frontispiece of this festival is: "Here plays the future". It is something wonderful and our young people will be able to feel this when they perform in front of the Berlin audience.

This is definitely the most important performance of the Romanian Youth Orchestra so far. More than that, you are the first Romanian ensemble to play on the great stage of the Berlin Philharmonic. Please, describe to us the significance of these moments for you and for the orchestra.

You can imagine the importance of this event for the ensemble. Of course, these young people already played on several great stages: Berlin, but in a different hall, a special hall in Rome - Auditorium Santa Cecilia, the Romanian Athenaeum, the Palace Hall in Bucharest, to mention just a few of them. But their presence on this stage and within this festival gives them the certainty that they are at the most important cultural moment of their lives. It means a lot for their careers. As I said before, they will always remember their presence on this stage and the fact that they are the first Romanian symphony orchestra invited to perform here also has a special resonance in our souls.