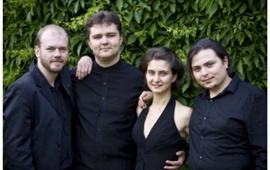 Interview with the Violinist Răsvan Dumitru, Member of the Arcadia Quartet

Thursday, 5th June, 2014, at the Romanian Cultural Institute in London there is taking place the last concert of the 2013-2014 seasonheld by the ARCADIA String Quartet, an impressive ensemble trained at the Cluj-Napoca music school. The four Romanian musicians, Ana Török - violin, Răsvan Dumitru - violin, Traian Boală - fiddle and Zsolt Török - cello have conquered the music world in 2012 after winning the impressive Wigmore Hall London International String Quartet Competition. Afterwards, there followed other impressive international competitions, the most recent one was the Osaka International Music Competition. The people in Cluj have a lot of music projects - recordings, concerts, perfecting courses here and everywhere.

Mr Răsvan Dumitru, on 5th June you will be at the Romanian Cultural Institute in London for a recital programmed in the concert series under George Enescu's sign. But which are the Arcadia Quartet's projects? As a matter of fact the concert's title you will be holding at the RCI is Et in Arcadia Ego.

It is not a name picked out by us, but by the RCI. I was surprised to see this title. It is a project which the RCI London has wanted to do with us for a long time. In 2012, being the winners of the Wigmore Hall London International String Quartet Competition, we unfortunately could not schedule it because of many commitments we have had until now. And it finally came RCI London's turn.

There, at the institute, you will perform works written by Haydn, Enescu and of course Felix Mendelssohn. Are these a part of your usual repertory or is it an exceptional programme chosen especially for London?

They are part of our usual programme, especially because not long ago we came back from Osaka, Japan, where we had the chance of winning another competition. Therefore, two songs are from our usual repertory and the Quartet no. 2 by Enescu was a work imposed by the Enescu Concert Society in London.

Which are the Arcadia Quartet's projects?

There are many. We have here in Cluj a chamber orchestra founded about a year ago, which is formed having us at the base - we are the leaders of every section: 1st violin, 2nd violin and cello. We are trying to do as many projects as possible with this orchestra, but of course, we are going ahead with the quartet because it is essential for us to have a career with it. Recently, we have launched in London, a CD with the quartets' Integral by Janacek. In autumn we will record an author CD - Adrian Pop, for a label in London. In autumn there comes a tour of ten concerts in Japan and many, many more which are hard to say right now, but we have projects until 2017, inclusively.

Your agenda is full of events.

That is right. We hope that in the nearest future we will be able to also hold courses. It is an old wish of ours to help Romania in this direction, too.

At one point you also had crossover projects.

Giving the fact that the preparation for the competitonss took almost all of our time, we left this thought aside. But now, because we finished this chapter, let us hope we can bring it to an end, as well.