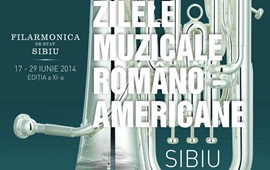 Between 17th and 29th June, 2014, in Sibiu, the Romanian-American Musical Days are celebrated through a series of shows organized by the local Philharmonic. Ioan Bojin is telling us about the festival:

Sibiu's Philharmonic is hosting the Romanian-American Musical Days. What exactly does these series of concerts imply?

During the summer, at the end of the philharmonic's symphony season, we present to the public in Sibiu and to the tourists a series of concerts which are a bit unconventional in comparison with the season's symphonic concert. Thus, we perform in church, in the Large Square of the town and in the courtyard of the Brukenthal Museum and we present to the public a series of interesting concerts with an extremely diverse and attractive programme.

This evening, 19th June, 2014, the festival continues with a concert presented by the Sibiu State Philharmonic Orchestra, conducted by the American conductor Emily Freeman Brown, with a 100% American programme. We also have a premiere of a concert for violin and orchestra written by Marilyn Shrude, one of the best known composers in the United States of America who will be present in the hall.

Afterwards, there will be a recital of Romanian music, a recital of lieder and songs for piano performed by the mezzo-soprano Claudia Codreanu and the pianist Inna Oncescu in the festivities hall of the Astra Library on Friday evening.

The festival continues on Saturday with a chamber concert of pipe organ, a Baroque concert, presented by the violinist Daniel Szasz and the American trumpeter John McElroy at the church in Large Square; a recital of saxophone and piano held by the American saxophonist John Sampen and the pianist and composer Marilyn Shrude.

The festival will go on until 29th June when it ends with a great concert of Russian music, this time having as guests for this concert the conductor Horia Andreescu and the Choir of the Transylvania State Philharmonic of Cluj-Napoca.