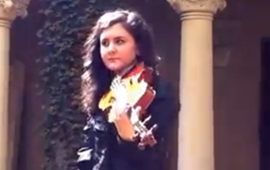 Thursday, 14 August 2014 , ora 9.00
The first edition of the European Music Campus project was held this month in Grafenegg, in Austria, project which is part of the series of manifestations unfolded by the European Union Youth Orchestra. Under the main title Youth, Music and Renewal at the Heart of Europe, the first edition of the European Music Campus gathered young and talented musicians from Austria and Eastern Europe, young people who benefited of master classes, debates and open rehearsals on behalf of some prestigious musicians. Romania was represented by the violinists Paul-Marian Răducanu, Dan Ion Nanoveanu, and Irina Fârtat and the cellist Benjamin Chircă.

The violinist Irina Fârtat told us about this project and the activities unfolded in Grafenegg:

Irina Fârtat, I would like you to describe to us in a few words the activities led by you at Grafenegg within the EUYO project, European Music Campus.

I had the opportunity to be the first generation of musicians of this orchestra. In my opinion, this was a useful experience for the career of every musician that went there, for us and also for the listeners.

How many musicians did you work with and how many candidates were there?

We should have been conducted by the official conductor of the European Youth Orchestra, Peter Starck, but he got ill, so the conductor Bruno Campo of the Sistema Orchestra in Venezuela took his place. It was very nice and very good that he emphasized, not so much the technique of performance, but what we transmit through music. The orchestra did not have many members. Although, we were only two playing the viola, we managed.

What kind of musical programme did you prepare there?

The complete version of Beethoven's Symphony No. 7.

How did you find out about this project and who propelled you there?

Professor Gheorghe Iliuţă, the conductor of the "George Enescu" National College of Music Orchestra, recommended me to this orchestra.

It is without any doubt an experience more than interesting, it is useful for you. Do you think Romania needs more projects like this one with and for young musicians?

Yes, absolutely. I am sure that in Romania such projects exist, but I have not yet got the opportunity to participate in them so far. I consider that it is very important to emphasize the enthusiasm the music brings and the vitality which should be brought to music, not so much to technique and the small problems regarding the position, but to the performance itself.