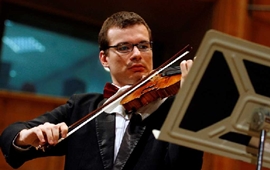 Alexandru Tomescu, in a Concert on the Stage of the Lebanese Philarmonic

Tuesday, 7 October 2014 , ora 11.18
The violinist Alexandru Tomescu has recently made his first appearance on the stage of the Philarmonic in Beirut, together with the Lebanese Philarmonic Orchestra. The artist has performed the Concert in E minor for violin and orchestra by Felix Mendelssohn; and the impressions after the event were more than positive, the audience having displayed admiration for the approach adopted by the Romanian violinist. Alexandru Tomescu shares with us the unique experience he had in Lebanon.

Mr Alexandru Tomescu, you have recently been invited to perform in Lebanon, together with the Lebanese Philarmonic Orchestra, conducted by Lubnan Baalbaki. Taking into consideration this experience that you have lived what are the impressions you came back with to Romania, of a country about which, musically, not much information is available?

I can say I have come back with some extraordinary impressions. Firstly, the Lebanese philarmonic orchestra has over 20 Romanian musicians, most of them former colleagues of mine, from highschool or from the Conservatory, so that the feeling I had upon my arrival was that of arriving home. This is something totally unexpected when you go to a country about which you had probably heard about only from the newspapers. Many things happen in Lebanon. The country is in a full process of reconstruction and this reconstruction also takes place in the musical area. The philarmonic has a very well trimmed season and weekly concerts. I had an excellent collaboration with Lubnan Baalbaki. He speaks Romanian perfectly, because he has lived and studied in Romania for almost ten years and he had such a great time in Romania that he is now eager to make a tradition out of inviting at least one Romanian musician every season on the stage of the Lebanese Philarmonic.

Thus, a conductor who studied in Romania and also a lot of Romanian instrumentalists in the orchestra, which leads us into thinking that that was the main ground of your collaboration with the Lebanese Philarmonic

Yes, indeed. These were the main points. I can also say that, in Lebanon, they organise a series of international festivals dedicated to classical music, festivals which feature very big names every year; of course, I also have the perspective of going back there whether it is for concerts with the Lebanese Philarmonic or for one of the important festivals in the country. It has been a very, very good experience.

As far as the audience is concerned, how does the Lebanese public manifest itself?

In the first place, the hall was not spacious enough for the many spectators attending the Mendelssohn concert - which I understood, were very familiar with anyway - not only the orchestra members, but also the audience, as well; it made them stand up on their feet instantly, a reaction which, I was told by the ones in Lebanon, didn't occur as often, meaning that is was something out of the ordinary; an enthusiastic audience, very warm, with a very up to date culture.

Was there any other event or peculiarity of the ensemble, of their operating mode or anything else that surprised you or that you particularly liked?

For me as a musician, the fact that I played Mendelssohn in Beirut, together with the Lebanese Philarmonicor at the Radio Hall, together with the National Radio Orchestra or in China are mainly common coordinates in 90% of the cases. Of course, the people are different, the halls are different, sometimes even the air you breathe is different and you feel things differently, but what unites all these experiences is music, the common experience of music and its sensibility, which, most of the time is surprisingly similar, no matter how far you have travelled this planet.

Therefore, a beautiful experience for you. Do you have any other concerts scheduled in areas outside the European space?

Yes, now in the near future I will make a series of recordings in Germany as I am working on a new CD. Then, there follows a tour in Belgium and Holland, together with my colleagues, the members of the Ad Libitum Quartet, a tour that will extend in three important cultural centres in Romania, and at the beginning of December I will be in the United States on a tour that will take me to the Kennedy Center inWashington and to Carnegie Hall in New York. The tour is very important to me because I will have the opportunity to perform Paganini's 24 Caprices in front of the American audience.