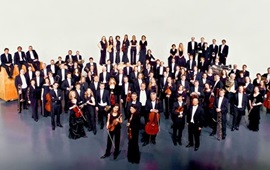 Tuesday, 23 September 2014 , ora 11.41
'Mister Felix Fischer, from its establishment, in 1945, to the present day, the in Stuttgart Radio Symphony Orchestra has had a series of partnerships with famous conductors. Which one of them had the greatest impact?'

'Yes, of course that throughout the years the orchestra has had more leaders. The first of them was, for that matter, the same who established the ensemble, his name was Hans Müller-Kray and at the time not only did he conduct the orchestra, but he also took all the responsibilities related to the organization of the orchestra's repertoire, also taking care of the musical programme of the radio. Hence, that was the first stage in the orchestra's history. And the first conductor who truly left his mark on the orchestra, formed it, being, at the same time, the first world-class orchestra leader who collaborated with the ensemble was Sergiu Celibidache. Oficially, he was never a lead-conductor there, his position never carried this name, but he was the artistic leader of the orchestra and we have to thank him for the fact that the Stuttgart orchestra was raised at an international level. A partnership likewise successful was the one with Sir Neville Marriner; of course that Celibidache and Marriner are completely different personalities, with Marriner the orchestra practised a much easier way of making music, because at that time, in the eighties, he was the one who anticipated a bit the style of the historic performances (historically documented). The orchestra has never produced so many compact-discs as in the period in which it worked with Sir Neville Marriner. An interesting part of our history in Bucharest is Georges Pretre - because he was the first conductor with whom I performed on a stage in Bucharest. This happened in 1995, when we were invited to your country and performed a programme which featured the symphonic poem Don Juan by Richard Strauss and the Fourth Symphony by Anton Bruckner. So, that was the first encounter with the Bucharest audience.

A bit later, towards the end of the nineties, Georges Pretre conducted the Stuttgart orchestra for a short while, following the same line that Celibidache had started - the French influence could be felt.

Since 1998 I have completely changed the direction, I worked with Sir Roger Norrington and for 13 years the orchestra has built its own sound identity - the press speaks about the 'Stuttgart sound'. The main characteristic of this sound is the lack of the vibrato, all the other features - such as the musical articulations and the choice of the tempo - are also related to the tradition of the historically documented performances. The orchestra has performed all the important opuses of the romantic and classical repertroire - beginning with early classicism and Haydn all the way to the opuses created at the beginning of the 20th century - in this manner. And now, for the last three years Stephane Deneve has been the main conductor of the Stuttgar Radio Symphony Orchestra. On this occasion the playing tradition has changed again, the styles of Celibidache and Pretre are once again followed, because Stephane Deneve is French, therefore, a great part of our repertoire is dedicated to French music now. One of our most significant current projects is the printing of the entire creation of Maurice Ravel, this being also the reason for which the first of our two concerts of the RadiRo Festival in Bucharest contains creations by Richard Strauss and Maurice Ravel - Don Juan, Death and Transfiguration, Scheherezade and the Walz.'

'Towards the end of 2012 there have been heated discussions regarding the wish of the administration of South-West Germany Radio Symphony Orchestra to unite the two orchestras - the one in Stuttgart with the one in Baden - Baden and Freiburg, out of the necessity to save funds. How were the discussions concluded and how is the Stuttgart Radio Symphony Orchestra affected by this decision?'

'In the meantime the discussions have ended, and beginning with the 2016 - 2017 season, the two ensembles - the SWR Baden - Baden and Freiburg Orchestra and the Stuttgart Radio Symphony Orchestra will get together in a single symphony orchestra, under the name of the South-West Germany Radio Symphony Orchestra. This fusion has not been yet put into practice, but the preparatives and plans for 2016 are already in action. Sadly, at the moment no more can be said about this process of unification of the orchestras.'

'The SWR Stuttgart Orchestra comes to Bucharest with its lead conductor - Stephane Deneve. I know that he was oficially named in this position in the year 2011, but he had conducted the German ensemble even before that. When and how did the collaboration begin?'

'The partnership with Stephane Deneve was a surprise to all, it was a coup de foudre - as the French say, a 'marriage' out of love. One of the concerts of the 2010 - 2011 season was supposed to be conducted by Michel Plasson, but he fell ill. He was supposed to lead a French music programme - among which,Roussel's Third Symphony, but Plasson fell ill a week before. So,we found ourselves without a conductor and started asking around who would be indicated, who would be prepared to conduct this French music programme, and the answer was Stephane Deneve. As chance would have it, that week was one of the few free in his season calendar. Hence, he came to Stuttgart, conducted the concert, and after that we all agreed that he had to be the new lead conductor of our orchestra. The partnership was so good, everything worked so nice and smooth; from the beginning there was a chemistrywhich we, the Germans feel, between the orchestra and the conductor. So, he has been occupying the position of lead conductor of our orchestra beginning with the 2011 - 2012 season.