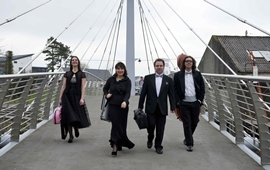 Interview with Adrian Mantu, Member of the ConTempo Quartet

Monday, 20 October 2014 , ora 8.58
The Mihail Jora studio will play host to the recital delivered by the ConTempo Quartet, on Tuesday, 16th September, 2014. We have talked to Adrian Mantu, the cellist of the ensemble which is RTÉ Ireland's National Television and Radio Broadcaster Quartet-in-Residence and GALWAY-Ensemble-in-Residence, about his presence at the Radio Hall.

The Irish public and not only called you the 'ABBA of classical music'. How and when did the story of the ConTempo Quartet begin?

In 1995 we were preparing…we were two quartets, in fact. Andreea and I were part of a quartet together with the Vornicelu brothers and my violinist colleagues - Ingrid and Bogdan who were the members of another quartet. Both groups were getting ready for a competition in Rome. Unfortunately, we were not able to participate. Quartet life is intense! And that year Romania had literally no representative, despite the fact that two very good groups had prepared to participate. We met for coffee purely by chance a month before the competition and while talking we realized that each of us needed the other; we needed the violins and they needed the low-pitched strings. There was only one month before the competition. Pretty difficult! And I thought 'Let us give ourselves a chance!' We participated in the competition, we were awarded the second prize and then we decided to give everything up because if in only one month we managed to win an international prize by working together, we realized we could go on. A long series of competitions followed and we won fourteen international prizes. That was also a means of making a living, from hand to mouth. An artist's life was as full of discomforts then as it is now. And I am not referring to the personal and the financial ones, but to purchasing instruments string, etc. By winning these competitions we virtually had the chance to participate in master classes in various countries and to buy instruments and strings with the money we earned and, thanks to the fact that we reached a record number of competitions and prizes, we received residence at the London Royal Academy. After that everything just came naturally. We had various shorter residences in Italy, France and Spain, ranging from a week to three months…in Canada we stayed for six months. Eleven years ago, after an international competition, we received the Irish residence, which became our country. We became Irish citizens seven years ago. This year, after another European competition, we have become RTẺ Ireland's National Television and Radio Broadcaster Quartet.

What changed after this appointment?

For us, nothing changes, in the sense that we will continue to do what we have been doing for about nineteen years - concerts - and we are preparing ourselves so we can be at the best level. To us, it is not important whether we have a concert at the Wigmore Hall or in a little village in Ireland; to us, it is the same experience, we guide ourselves according to the philosophy of the Amadeus Quartet: 'Play the next concert as if it were the last one'. We, as human beings, are very fragile, anytime a tragedy could happen. Of course that, it is an honour for us to have the support of Ireland's National Television and Radio Broadcaster and it is something extraordinary because we receive very good advertising. As for the West Coast residence, the same... I may say that classical musicians used to be received like rock stars; because not a week goes by without having your photo in a newspaper or an article published about you, which is very good because we all complain about the absence of the young audience. On the West Coast, the average age of the audience that attends our concerts is that of 26-28. This means that it does not leave the mature public out, but many students and highschool pupils also come to our concerts; a very good ballance is created. In fact this evening's programme (16th September, 2014 - the author's note) is also based on the old and the new. We have Haydn - the father of the quartet and his modern disciples, including Bartok - Romanian Dances. We have also another work of an Irish-American composer,because we are also supposed to have a tinge of colour in our programme all the time. We are of the opinion that today's public does not come to a concert to listen to something beautiful, but to something interesting.

However, what is different when you perform a concert in Romania, especially at the Radio Hall?

We were all born somewhere, we all belong to a community and...to a place where we feel natural, apart from the fact that we feel natural on stage when we play; this only enhances an extraordinary feeling one cannot describe.

To be honest, most of the times I play in Romania - I am talking about the positive emotions, because we have reached a certain age now, we do not feel so nervous because of stage fright, anymore - positive emotions increase in an extraordinary way. Of course, you are able to recognize most of the people who come to the concerts, whom you get to know, students, teachers and musician colleagues especially because now it is very easy to keep in touch. You feel at home in a way. The last time we played at the Radio Hall it was in 2000, fourteen years ago, but I am convinced that when I walk on stage and look at the audience it will be as if it were yesterday. Being able to play at home is something extraordinary!

What I can say is that we will perhaps bring something new to Romania; we are used to presenting our concerts; we are not the supporters of music hall programmes; there is no information about the pieces we are going to play this evening, because we are always forgetting about the public in the equation of the act of creation. In our case, the composer - performer - public, this triade is always limping and the public is put aside. I am not saying whether this is good or bad. This is only what I noticed. In our concerts, even in some contracts we sign, there is this stipulation - to present each musical piece . It is true that it somehow gets you out of your concentration, but after doing this for nineteen years it becomes something natural and a very strong connection between the public and the performer is formed because we try to create something mystical together on stage. While playing one of Haydn's works, which was written over 200 years ago, we are all trying to transpose in time. If we present a new work we must present the public the new coordinates, the new language we will adopt, so that it can feel comfortable and know what to follow. You don't have to give the public too much information, because the act of creation is free and everybody can imagine or think about whatever he or she wants, but this connection must necessarily exist. In Ireland, since it is a smaller country, we know the people in the audience, we meet them in our everyday lives - doctors, teachers, people who work in stores, drivers and so on - and, from my point of view, we are all on stage. Audience and performer, we are really travelling together, they are coming with us, they are familiar faces and it wouldn't surprise me to see some Irishmen in the hall this evening, as well. This is extraordinary because everybody feels comfortable - us with our public, they (the public) with their artists. This is why, I feel these residences are extraordinary. I do not know their equivalent in Romania, maybe it is a bit different, a little more inflexible, in the sense that you, as a soloist, come, play and then leave. No! As artists in residence - either Ireland's National Television and Radio Broadcaster or the GALWAY-Ensemble-in-Residence on the West Coast, in Galway - we are part of the community, we take part to workshops in schools, we participate to events for various groups, such as, retired people and business people and we are always in touch with the mayor.

The political part is very important because we always need support. A fantastic community is created among all social classes. This is what, according to my understanding, being an artist in residence is about...and we go back to the times of Haydn, who was an artist in residence at Esterhazy, and so on; when a strong connection was created between the artist and the place which he was part of.

Going back to your question, these connections with the community have been kept. They may be even stronger than they were when I was living in the country because, obviously, you get to appreciate someone when you are far away . And I do not mean us, the ConTempo Quartet, but us who feel the absence of our friends and colleagues who are here, in the country. I think this will create a fantastic bond at the Radio Hall this evening and at the ArCub, former Arlus, tomorrow evening, where I made my debut as a pianist at the age of five - around thirty years ago. This is precisely why we are here, for this feeling we would like to relive.

Do you have a message for our listeners?

With us on stage they won't certainly get bored. We are a quartet which takes many risks on stage. So to say, risks...we are not surgeons, nobody will die on stage... but this is why we take these risks, because if a composer thought about setting a metronome tempo at 200 or presto, why not try it? Only because of fear? No, this is an experience. We must bring Haydn's spirit back here, we must try everything we can. With us the public will never get bored, there will always be interesting things in the concert - old and new. We have contemporary, but very interesting plays. We have Terry Riley; it is an extraordinary musical piece which will certainly stick into their minds for the months to come. We are not doing any innovations, it is a standard musical piece from the repertoire of the famous Kronos Quartet. Haydn - we play the Sunrise and the Rider, a work I only learnt about a year ago. I hadnot heard it, it is not played too often, but it is such an emotionally powerful work that we cannot part with it. Since we have been playing it, we have included it in the programme every two or three concerts. It is a very interesting work and I am sure the public will enjoy it greatly. I hope they will also like our short presentations of the compositions and we will eagerly wait for them during the intermission or after the concert to shake hands with them and discuss with them, because another important thing is to continue the relationship we have in the hall after the concert, as well.