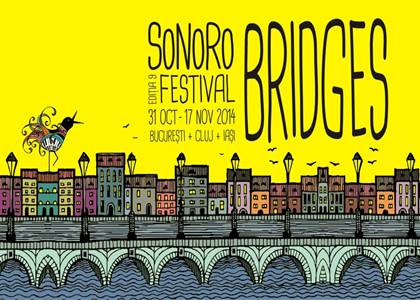 The SoNoRo festival will begin in the Capital City tomorrow, 31st October, 2014; and the first event will be held at the Cotroceni Palace. Violist Răzvan Popovici told us about the ninth edition of this series:

The Ninth Edition of SoNoRo will take place between 31st October and 17th November. The series started in Vienna. How did the recital held with the mezzosoprano Ruxandra Donose, unfold?

It is not a premiere, we have played together before, we are close friends. It was a special moment because, for the first time, we released the SoNoRo festival outside of Bucharest, more precisely even outside of Romania, at the Konzerthaus, in the wonderful Mozart hall of the famous Vienna Concert Hall.

Who are the artists who open the SoNoRo Festival?

There will be various artists because there are three major pieces. We will have among us, for the first time, the violist Vladimir Mendelssohn, well-known to the public as a member of the Enesco Quartet in Paris, the director of the Festival in Kuhmo and a renown professor at the Conservatory in Paris.

At the piano we have the artistic director of the festival, Diana Ketler from London, who is very well-known to the public of Bucharest, as well. The Finnish pianist Henri Sigfridsson will also be in Romania for the first time. We have three notable musicians playing the violin. The first one is Alina Pogostkina, who is also well known to the Romanian public. Also for the first time in Romania the following two violinists will play: Hugo Ticciati from Stockholm – who is an exceptional and original Swedish and the Italian violinist and Daniel Rowland – the primarius of the Brodsky Quartet in London. Anja Lechner will play the cello – she is virtually one of the most important artists of the ECM Records label and we will also have the German cellist Julian Arp. We are opening the concert with the Concert No.. 12 in A Major, KV 414 , by Wolfgang Amadeus Mozart, with the piano and ensemble, and after that we will continue with a piece which is rarely played, but is extremely important in the repertoire of the 21st century, the Piano Quintet by Erich Wolfgang Korngold, – the great wonder-child and, great Hollywood composer; after the intermission , there will be played a piece close to our souls, emotional, legendary even, the String Quintet for two cellos by Franz Schubert.

SoNoRo accustomed us to its events being held in unconventional places. Is it this year’s case, too?

Traditional concert halls are not missing. In Iaşi, for example, there is the “Vasile Alecsandri” Theatre; in Cluj – the beautiful Auditorium Hall; in Bucharest – the Romanian Athenaeum or the Auditorium Hall of the National Museum of Art. But we have also chosen unconventional spaces like the Ark – the former stock market of the flower market in Bucharest, or we return to the National Bank once again, where concerts are not necessarily regularly played. We have already the Marble Hall of the National Military Circle in the Bucharest concert circuit five or six years ago. The Sain Joseph Cathedral is a very, very suitable space for concerts... yes, we continue to include unusual spaces, but ones which have fantastic acoustics, extraordinary architecture and, which I believe, show that Bucharest is a perfect venue for musical initiatives, since these are halls which accomodate between 150 and 350 – 400 people for chamber music.

Undoubtedly, SoNoRo always has a very powerful conceptual tinge and we endeavour to always create compact programmes; programmes which make sense as a whole, and the concerts are virtually conceived as a puzzle so that the more concerts you listen to and the more SoNoRo soirees you attend, the more you get the big picture at the end.

This year the title is Bridges – Bridges, arches – as you may have them. Most of the concerts are inspired from renown bridges – we have the Rialto in Venice, the Pont Neuf in Paris, the Brooklin Bridge, the Westminster Bridge in London, the Alexander Nevski in St. Petersburg. We then have concerts related to the theme and which are named Ephemereal Bridges. For example the Evening with the Tarkovsky Quartet, when the son of the famous Tarkovsky, Andrei Tarkovsky jr., will make an extremely poetical video projection.

There will be a concert entitled Over the Danube held at the Bragadiru Palace, where the great violinist Roby Lakatos will play along with his band from Bruxelles. They will play pieces by Georges Boulanger, Grigoraş Dinicu, Astor Piazzolla and so forth – it will be a concert full of colour and charm in the Main Hall of the Bragadiru Palace. A special concert entitled Under the Bridge will take place at the Ark,  during  the second festival evening, on Saturday, 1st November – funny enough, but the title is very suitable since it will be a very funny programme, one with pieces which are very rarely played. We thought about combining Mozart’s famous Nachtmusik with John Cage’s Living Room Music. And Wynton Marsalis will close the repertoire of this soiree after several other musical surprises.

We would be delighted to have you with us because, as said before, the SoNoRo puzzle is waiting for you to discover it and we are delighted that this year we have managed to create one of the most varied and rich SoNoRo programmes so far.