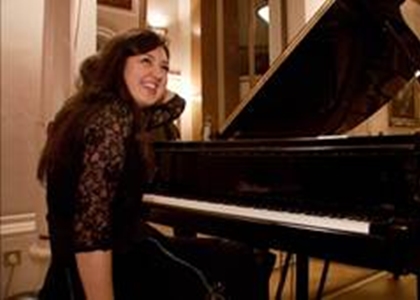 Interview with the Pianist Alexandra Dariescu

Friday, 24 October 2014 , ora 13.19
On Saturday, 25th October, 2014, the Princess Margarita of Romania Foundation organizes, at the Romanian Athenaeum, the seventh edition of the annual concert, whose purpose is to raise funds for the benefit of the Young Talents programme. The event also celebrates the birthday of his Royal Highness King Michael I. The Orchestra of the Princess Margarita of Romania Foundation will have as guests the conductor Tiberiu Soare at the stand, and the pianist Alexandra Dariescu as the soloist. We are given further details about the concert, but not only, in an interview granted by the pianist Alexandra Dariescu.

You will be this year's soloist of the annual concert organized by the Princess Margarita of Romania Foundation. How did you receive this invitation?

The invitation from the Princess Margarita of Romania Foundation to participate in this concert, which is taking place on 25th October, made me very happy. The first time I met the Royal Family was at my concert, at the Royal Albert Hall, in London, last year. After that, we kept in touch and I was very joyful, when I received such a beautiful invitation.

Relating to you, how important was the support that was given to you as a young talent – because this concert is for the benefit of the young talents – and where did you receive it?

I have received a lot of help from a few foundations in Great Britain, Switzerland, France, and even America. I believe that each young person must be supported and helped and that is exactly what the Princess Margarita of Romania Foundation does – it changes lives, helps, promotes, and supports Romanian young talents. It is extremely important to support these young talents and help them develop as much and as beautifully as possible.

What pieces did you choose to interpret on the stage of the Romanian Athenaeum?

Are you collaborating with the conductor Tiberiu Soare for the first time?

Yes, it happens for the first time and I am very happy about this collaboration. I cannot wait for it!

What other projects have you prepared for the next period of time?

I am busier than ever. I play ten concerts in fourteen days – in England and Germany, including the one in Bucharest. I have a recording session at the BBC Radio 3 on 31st October, which will be broadcast live; I will be playing the Triple Concerto, by Beethoven, accompanied by the Royal Northern Sinfonia, which originates from Great Britain. The two concerts from Germany will be accompanied by the Dessau Orchestra and the Dutch conductor Antony Hermus; I also have to run three workshops for young people from Great Britain, Germany and Romania. I am also very involved in educational projects because I strongly believe in supporting the young talents and all I can do is to share my experience to others. I think that the most beautiful thing we can do is to learn from each other.