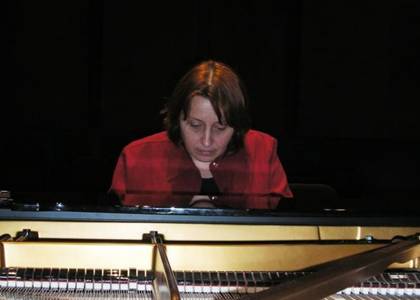 Dana Borșan is the Soloist of the Radio Chamber Orchestra

Wednesday, 26 November 2014 , ora 9.54
Mihail Agafița, who is the principal conductor and the artistic director of the Symphony Orchestra of Moldova National Philharmonic, will be standing at the conductor's desk of the Radio Chamber Orchestra on Wednesday, 26th November, 2014. The soloist of the concert will be Dana Borșan, who will play the Piano Concerto No. 1 in C major, Op.15, by Ludwig van Beethoven.

You are interpreting a concerto which has a very special history. Which place does it have in your repertoire and what memories do you have about this concerto?

It is the concerto with which I made my début, when I was fourteen years old. I had played a Concert Rondo by Mozart before, accompanied by my high-school's orchestra, but that performance was my first appearance in an important concert in Cluj, along with the Sigismund Toduţă Music High School Orchestra from my home-town, which had a lively activity and with which I played a lot during my high-school years even a rich concerto repertoire, conducted by Emiliu Dragea - high-school teacher - who is no longer among us … This would be my first memory.

The second memory I have about this concert is related to the fact that I studied the concerto when I was a student in the 8th grade, in Cluj with a private tutor with whom I worked just for one and a half year, but that time meant a lot to my development and to the knowledge I gained in playing the piano.

The tutor's name is Petru Florian and after I performed this concert, which he helped me prepare - he was a teacher at the High School of Music in Cluj-Napoca and a pianist, and he was also performing in concerts ... - he came to me, he congratulated me and told me: I am leaving tonight. I have received a scholarship to study in Germany. I knew that would happen and so it did: He never returned. We met again in Germany in 1991; he was a teacher at the Osnabrück Conservatory of Music.

This concert is not played very often, unjustly, I would say. It is a concert full of energy, a very bright one; despite the quite simple compositional means and the limited pianistic options in Beethoven's time. The concert overflows with tonus and energy and it has one of the most beautiful slow movements. I always say that this movement has two soloists - the pianist and the clarinet. It is one of the most beautiful slow opuses Beethoven composed. Every time I come across piano solos and sonatas in this scale - A flat major - they have the same colour, character and the same melancholic musicality, which I find in this second movement of this concert, and in the sound, colour and timbre of the clarinet, which I think is the warmest timbre a musical instrument can have.

This is not your first collaboration with Mihail Agafița. How has this musical dialogue developed?

This concert stirs all kind of memories. It could be a coincidence or a sign that I am getting old … you start to recount memories … . I met Mr. Agafiță in a concert in Botoșani. It happened to be scheduled to perform together many years ago … but I didn't know who he was. I remember that Mr. Ioan Țurcanu told me that my performance would be led by a young conductor. The Piano Concerto No. 2 by Chopin is very difficult and the conductors kind of avoid it. When I arrived at the place we were supposed to rehearse, he didn't ask me anything. Before raising the baton in order to start the rehearsal, I thought to myself: Good Lord! Does he actually think he can conduct this concert!? He didn't ask me: At what tempo, What do you intend to do … . There are rubatos on the score, especially in the third movement. Every pianist has her own ideas … . He didn't ask about any of mine! I thought … perhaps, he will ask me at some point! What I mean is that nothing similar had happened to me. I played it perfectly, da capo al fine, almost impeccably! The orchestra he was conducting was following me like a shadow! I couldn't believe it! I was extremely excited. He is a thoroughbred talent. We have been collaborating dearly ever since and I also recommended him here and in Romania, too, in Cluj, for instance … I recommended him and they liked him so much that they hired him immediately after his first concert there. He is a very talented musician and he is extremely engrossed in his occupation, which I love about him very much. He is very young for a conductor. A conductor can't train in the number of years an instrumentalist does. I am glad we are working together. This evening's programme is a solely Classical one, in my opinion, because it consists only of Haydn and Beethoven's compositions. To me, this is the greatest music, with all the well-ordered elegance and spontaneity of the Haydnian discourse and the energy specific to Beethoven, which I was talking about.

I think those who will dare to come to the concert, will spend one and a half hour in a very pleasant and energizing way, which will make them feel mettlesome.

The programme of the Radio Chamber Orchestra will be complemented by two symphonies written by Joseph Haydn: the "Hallelujah"Symphony No. 30 in C major and the "London" Symphony No. 104 in D major.