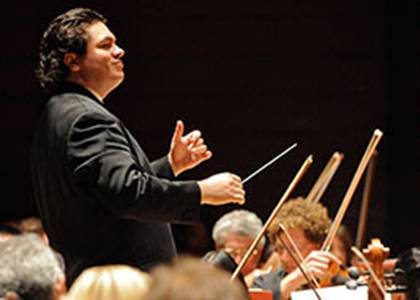 Friday, 28 November 2014 , ora 14.24
Two great Romanian musicians will be together on the stage of the Radio Hall, for a programme including a Romanian suite and two compositions belonging to Mozart and Mendelssohn, respectively. On Friday, 28th November 2014, the violinist Gabriel Croitoru will be the soloist of the National Radio Orchestra, conducted by Cristian Măcelaru.

This evening you will be conducting the National Radio Orchestra, with a rather varied programme: a Romanian work, a classical concert and a symphony by Mendelssohn. How was this programme planned, structured?

I wanted by all means to conduct a Romanian work in Romania and, moreover, a work by Silvestri as it is one I have loved and admired for a long, long time; I also conducted it in America. Then, I wanted to include Mendelssohn's symphony, because although it is less often played, for me it is full of passion and of an extraordinary feeling: I can relate to this symphony, because when Mendelssohn composed it, he meant it not as a depiction of Scotland that he had visited ten years before, but, according to what he wrote in his diary, as a memento of the feeling that the place had arisen in him. This is similar to the reason for which I return to Romania: an evocation of the feeling I had growing up here. Thus, these two works have become connected in my mind. Mozart's concerto is very well suited, since it has the same tonality as Mendelssohn's symphony. Mozart was an important composer in Mendelssohn's evolution, as the latter was an admirer of the composers of old: Bach, Mozart. That is why I felt that the two of them were a good match.

What can you tell us about your getting together with the violinist Gabriel Croitoru?

I have known maestro Croitoru by reputation for many years, since I was a child, but this is the first time we have actually met. This happens to me quite a lot - I know very many Romanian musicians in Romania, but they do not know me because I left when I was very young. But we will see tonight! I believe that our meeting was very good. I think that he can tell the same thing about me. I am quite honoured and I am happy that at last I can start getting to know soloists who are from Romania.

I get back to the work composed by Constantin Silvestri, thinking of Romania's National Day, 1st December. Was the programme planned in such a way as to include the following period?

Not as far as I know, but Silvestri is a composer I want to make better known all over the world. As a matter of fact, outside Romania, Silvestri is well-known as the conductor who transformed the Bournemouth Orchestra - where he was the chief conductor for many years, but he is not known as a composer. I believe that he deserves a significant place among the other East-European composers of that period. His music is very original, but at the same time bears the mark of the Romanian folklore, which is very welcome everywhere, and that is why I really enjoy conducting his works.

Last week, when you granted me another interview, you were in Manchester. Now you are in Romania. What is next for conductor Cristian Măcelaru?

Next week I will be in Toronto, with the Toronto Symphony, after that - with the Philadelphia Orchestra and the week before Christmas in Seattle, with the Seattle Symphony.

What I most fervently wish is for people to come to concerts not because I am the one conducting or because I want a full house, no! But just because I believe, and this belief is based on my own experience, that music can make our life better, can help us reach a more beautiful place, have better and more lasting experiences. Music is the only way for us to transcend the current moment, to forget the world we live in and go to a more beautiful and pleasant world, a universe full of peace and joy. Music can do this and that is why I want everybody to come and experience this thing at least once in their lives. It is of paramount importance!