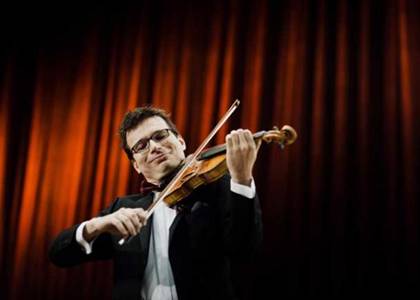 Alexandru Tomescu Brings the Works of George Enescu and Nicolo Paganini to New York and Washington.

Monday, 24 November 2014 , ora 14.27
Violinist Alexandru Tomescu will perform three concerts in New York and Washington, on the National Day of Romania, the first event of this series being scheduled on Wednesday, 26th November, 2014, when the artist performs works by George Enescu and Niccolò Paganini. Alexandru Tomescu stated about this tour...

At the middle of this week you are beginning a tour in the United States. Which are the towns you are about to visit?

This is a very important tour for me because I am going to visit three American big cities - Chicago, New York and Washington - and perform in the most beautiful concert halls there - a historical art deco hall called 'Bradley' at the Chicago Cultural Center, Kennedy Center in Washington, The ONU Building in New York and last but not least, the most important of them all, the famous Carnegie Hall in New York.

One of these performances will take place right on the National Day. What will your feelings be, considering you will be onstage on 1st December?

On 1st December there will be the concert with the most consistent programme, that is, Paganini's Caprices - all 24 caprices - in the classical marathon concert I have performed not only in Romania, but also abroad - in Italy and New Zealand, several times. It is a great joy to be able to present a programme that is 100% me in front of the American audience, in what may be the most important concert hall on the North American continent. More than that, the occasion favouring this concert, The National Day of Romania, is entirely special and makes this concert have a peculiar meaning. Of course, I will not let out of the programme a Romanian composer, especially when it is George Enescu I'm thinking about. I believe that by choosing this way of celebrating our National Day in New York, we can show the American audience that we are not necessarily tied down to our Romanian composers, and that, for example, we can enforce ourselves as a nation and make our culture known through the works of Italian composers, as well .

In one of our previous interviews you told me that this complete set by Paganini is rarely taken on by violinists. What would you think might be the cause of this?

It is true that the entire set of Paganini's Caprices is seldomly performed. I don't know, it's hard for me to try and talk on behalf of other violinists who do not perform it. Any complete set - and I played all the three great sets for solo violin over the last few years: Ysaÿe, Bach and Paganini - requires a special effort, but it also offers considerable satisfaction. You can really enjoy encompassing the whole work in just one evening, understand it in its entirety and present it to the audience as a whole. Of course, the effort is huge, each preparation requires an extremely careful and intense cantonment-like training, but the reward is equally gratifying.