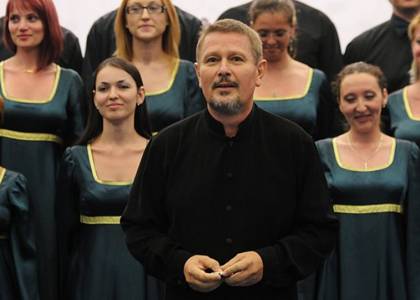 Thursday, 27 November 2014 , ora 14.29
The SOUND Choir celebrates a round-figure birthday - twenty years - with an anniversary concert on the stage of the Radio Hall, on Thursday, 27th November, starting at 19:00. Over the years, approximately 130 young and talented students and graduates from different colleges in Bucharest - all of them lovers of good quality music - have been the members of this choir.

The choir, which is conducted by Voicu Popescu, reunites 35 members at the moment.

The SOUND Choir is celebrating twenty years of existence. What are the most important moments of this ensemble's artistic journey?

It is an important moment because, in its twenty years of existence, the SOUND Choirhas managed to add quite a few distinctions to its collection of prizes, which is worthy taking into consideration. What I am saying is that the ensemble has succeeded in taking the image of the traditional Romanian song to fourteen tours abroad, to a lot of journeys around the country, to numerous benefit concerts in disadvantaged areas, here, in our country, and also abroad. I remember that we managed to go on a humanitarian tour in Belgium, in 1999, tour which ended in a financial aid to a number of old people's homes in Bucharest. These are a few of the paths on which the SOUND Choir has gone, if I were to talk about our artistic activity, because the members of the SOUND Choir are also part of a foundation and they have succeeded in organizing a number of thematic events. The SOUND Choir has participated in seven editions of a choral symposium in Sinaia, four editions of the children's and youth choir in Bușteni, two masterclass editions and the editing of an A Capella choral journal; and these are just a few landmarks of what the SOUND Choir has transmitted to its public over time.

You are celebrating the two decades of activity on the stage of the Radio Hall. What is the programme of this concert and who are the guests?

I must admit that we have a quite ambitious programme. The first part of the concert focuses only on compositions from the Romanian repertoire and I could say that we have focused on the archaic folklore and a processed folklore, to the extent that our composers knew how to do that. We are talking about composers, such as, Tudor Jarda, Dariu Pop, Sabin Păutza and Constantin Arvinte. It is a repertoire which is very dear to our hearts and which we took with us wherever we travelled; and the second section of the programme is a mosaic of works which left their mark on our choir's existence by the simple fact that they were either works imposed to us at international competitions, or chosen by us to participate in these competitions with and which helped us win a lot of important medals and awards. Thus, the evening's programme will contain contemporary and classical works, which have a certain echo in our collective memory and which we will be sharing with our public, both through the songs I have already presented to you and through the six film moments, therefore video moments, in which we are reflecting on our professional activity, but we are also revealing a few behind-the-stage secrets, moments which made us happy being together and which, in a way, have changed our destiny. We want to share this experience with the public. Moreover, on this occasion we are releasing the book entitled Twenty Years of SOUND, which we prepared so that our public could understand this phenomenon.

Certainly, we chose to invite a number of artists, who either were with us at a certain moment or with whom we had the chance to collaborate on special occasions. I am talking about the mezzo-soprano Sidonia Nica, who is a soloist of the Romanian National Opera, the pianist Mădălin Voicu Jr. and the musician Adrian Naidin, who has a complex personality, which allows him to do things at a level we would all like to attain to communicate artistically with our public. These moments will have their own charm for the economy of the concert and we hope that the public who comes to the Radio Hall will leave home happier, after an evening full of sound and soul, because the SOUND Choir is not just a choir which sings in a way which we are used to; of course, it doesn't surprise through collateral and movement effects, but through the zeal with which it appears in front of its public, through the way it chooses to interpret its songs, through the feelings it puts into every performance, on the one side and, on the other side, through the nature of its repertoire, which is profoundly involved in the Romanian choral phenomena, but also in what we don't usually hear on the stages of our country, and by that I mean the international repertoires. There are works which deserve to be listened to, especially now, before the Christmas season, which I believe is a time in which we can manage to freshen our thoughts a little and enter the New Year a little cleaner and more tranquil.