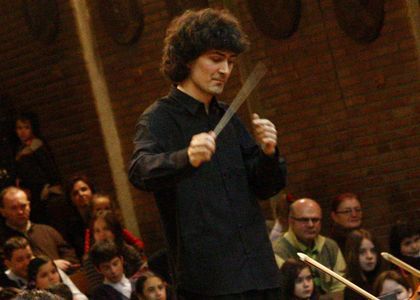 Matei Pop - at the Conducter's Desk of the Radio Chamber Orchestra

You are one of the representatives of the young generation of conductors who is already enjoying a great success. What made you choose this career?

It is hard to say in only a few words … I think it is the sound of the orchestra, which has entranced me since I was little. My father was working at the Cluj Napoca Philharmonic Orchestra and this is why not only I came to concerts, but I also had the possibility to watch the rehearsals; at about the age of twelve, during the rehearsals of the Symphony No. 1 in E flat major, by Mozart, when the conductor was an Austrian, who was conducting the orchestra very beautifully. Every time the orchestra resumed its playing, after having been stopped and given new indications, an improvement of the sound could be heard and I think it has been since then that I wanted to have this profession.

Did it matter that your father worked in this field of activity, the field of music?

It certainly did. Although I couldn't tell how much it mattered; I had other passions too, but I wouldn't say that music has won in the end, but I just happened to choose the path to become a musician.

Since we are talking about conducting and about the fact that music has won, I might add that you are also a composer …

Indeed. My time doesn't really allow me to compose any music, because my conducting career is a very strenuous one, both in terms of preparation time and psychologically, and I am still at the beginning of my career and given the fact that I am so young, I simply can't share my time so that I could compose more music. I rarely compose any music. My conducting career is the most important to me at the moment. I will probably start composing again with time.

Firstly, the sound of the instruments; then, of course, there is a tradition in music which, as the centuries pass, has increasingly enriched itself, even if it must be remarked the fact that a certain stylistic confusion is constantly present - in the sense that some musicians persist in searching for new paths all the time and this is why music has distanced itself from the average listener, while other musicians try to return to more gentle sonorities, which can convince the less-competent public.

Music can make happy anyone who has the sensibility and receptivity for it. There is no doubt that those children can win valuable things from music. Concerning the educational concerts, I put the question differently. They are very important to us, the music guild, because it is very unlikely for an adult of, say, twenty-thirty years old, who hasn't listened to the sound of an orchestra live , to become a music lover, unless we raise him surrounded by that kind of music since his childhood. But, if we try to reach the children while they are still little, those of them who have a native gift and interest for music can develop this passion; because you need passion not only as a music practitioner but also as a music lover. It is all based on one's passion for music.

Reaching the topic of this evening's concert, how did you structure the programme?

At first, we were honoured by the presence of the distinguished violinist Cristina Anghelescu, with whom we had the privilege to make my conducting début in Botoşani, in 2007. She played Mendelssohn then, now she is playing the beautiful Violin Concerto in A minor, by Bach. This was the set part of the programme. We embroidered it and saw what would go well. Since the violin concerto is a baroque work, we immediately chose the Concerto for String Orchestra, by Sigismund Toduţă, that too being a baroque-inspired work, even though it was written in the modal musical language of the first half of the 20th century; after the intermission - the Italian Symphony, by Felix Mendelssohn. Mendelssohn too learnt a lot from Bach's creation - by that, I mean the polyphonic thinking - and that can be sensed in many of the score's pages, especially in the first and final sections.

Are we talking about a special feeling that you experience when you conduct at the Romanian Radio Hall?

Yes, there is no doubt that the Romanian Radio Hall exudes a special atmosphere. It is a concert hall built at the highest levels of quality. I most certainly feel different there.

Come to listen to a diversified programme, which includes Romanian music, a soloist of the highest quality and a young and enthusiastic conductor, who is standing at the conductor's desk of the Radio Chamber Orchestra for the second time.