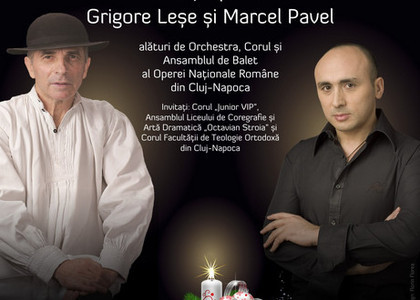 The Romanian National Opera of Cluj-Napoca has organized a Christmas concert on Friday, 19th December 2014. Grigore Leşe and Marcel Pavel are among the distinguished guests who will perform alongside the soloists, the Choir, the Ballet and the Orchestra of the Cluj-Napoca Romanian National Opera. Sabin Mircea Rus, the manager of this project gives us further details.

The Cluj-Napoca Romanian National Opera has scheduled a Christmas concert that will take place on Friday, 19th December 2014. What have you prepared for the public?

It's an ample programme, varied and oriented towards that particular kind of public that doesn't usually attend our shows, so that the whole community will be able to enjoy the show, even more so given that the hall is very large. You must take into account the fact that we were prepared and we had a show planned in our 928 seat hall, and by relocating the event to the new Polyvalent Hall in Cluj, we found ourselves in the situation of having 7000 seats available for the public. This even made us reconsider the programme and refocus it towards a broader variety of public, shaping it into a more approachable form.

The two guests are Grigore Leşe and Marcel Pavel. Why did you choose them?

Marcel Pavel is already a regular to the Cluj audience. He has previously sung for the Cluj Days Festival. He's an artist that has already a public following in Cluj-Napoca. As for Grigore Leşe, even though he's well known within the Transylvanian area, he has not performed in Cluj for a long time. He is also a graduate of the 'Gheorghe Dima' Music Academy, therefore our colleague somehow, so I think he is the best option we have to give this dimension to the programme. At the same time, we'll manage to bring it closer to what the winter holidays mean, and to somehow give him a special feature, that of a programme seasoned for Christmas Eve, too.

But Grigore Leşe and Marcel Pavel are not the only guests to this Christmas concert. I would like you name the other groups that will take part in it.

The cast is an extremely large one. We have the Soloists Ensemble, the Choir, the Ballet and the Orchestra of the Romanian National Opera in Cluj-Napoca. Together with them, the Junior Vip Choir of the 'Sigismund Toduţă' music college will also perform. I'd like to add, with your permission, two other guests that are maybe as special as the others even though they are not so well known, both of whom come from the Prussian area, namely Vienna and Germany - the tenor Cosmis Ifrim and the bass Zoltan Nagy; two musicians who graduated from the Music Academy in Cluj, and who are very treasured and very loved by the people of Cluj.

We very much want this project, which is part of a programme we initiated one year ago - the Opera for the City programme - to draw the opera out of the lyric theatre area and bring it closer to the public. We are expecting a mutual reaction from the people of Cluj; for the time being they have reacted very well - if we look at the hall seating plan there aren't many available seats left - and I think that those Cluj people who haven't bought a ticket yet but want to see us on the evening of 19th December will hurry to catch these last seats. We'd love to have the whole hall sold-out and we are happy to offer the community a royal and special Christmas show, which may in the future become a tradition in Cluj-Napoca.