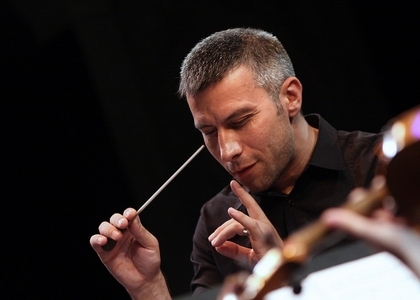 The National Radio Orchestra puts forward today, 19th December, at the Radio Hall, a concert event, in the memory of those who passed away during the events that took place in December 1989, twenty-five years ago. You will listen to a touching repertoire, which comprises of three sacred songs by Carlo Gesualdo da Venosa, the Concert for Violin and Orchestra To The Memory of an Angel by Alan Berg and the Symphony No. 4 by Gustav Mahler, under the baton of the conductor Tiberiu Soare, with the participation of the violinist Alexandru Tomescu, of the Academic Radio Choir, of the soprano Mădălina Barbu and of the violinist Virgil Zvorişteanu.

This evening at the Radio Hall - a special concert, a concert dedicated to the memory of those who dissappeared twenty-five years ago so that we could be free. Why is it important for us not to forget that moment?

Precisely so that we can remain free. I have seen recently an editorial release - in fact it is the reprint of Friedrich Hayek, The Way to Serfdom. It is a book which, I believe, should be read by every one of us. The way to serfdom is opened precisely by these things, and oblivion is the first of them. Humans have an astounding capacity to forget things, especially the horrors. This is somehow natural, a psychologist would tell us, but we must not forget. We must keep present in our memories those sacrifices that were made so that today we could have the liberty to agree or not with one another in a free society.

Why these particular works for a special concert?

We somehow wanted to avoid the cliche of a requiem. It would have been very simple and even very beautiful. There are works, masses of the dead of an unworldly beauty and the first which would have come to my mind would have been Gabriel Faure, but I believe that it would be better to rather choose the way of communication than the one of mourning and that it would be better to send a consolatory message to those who are still alive and who suffered the losses of those young people. Therefore, these are works with a message of consolation. The first three Cantiones by Carlo Gesualdo da Venosa - there is an a capella choir, there are three sacred motets written in 1602, edited at Naples and we arranged them as a sort of a strictly vocal music curtain, with a corum angelorum to introduce the theme of this concert. The Concert for Violin and Orchestra by Alan Berg, To the Memory of an Angel, interpreted by Alexandru Tomescu, also carries a message of consolation. This is the way in which Berg reasoned it; it is dedicated to the memory of Alma Mahler's daughter. And the Symphony No.4 by Gustav Mahler ends with a lied named the Heavenly Joys. There is a set of themes which conjoin all these pieces of music from different eras and with different styles. If we were to consider Berg-Mahler, they are virtually from the same era; Berg comes shortly after Mahler, but their styles are extremely different. At the same time one must not forget that from the three sacred monsters of the second Viennese school - Schonberg, Vebern and Berg - Alan Berg was by far Gustav Mahler's favourite. Hence, there could also be a spiritual connection between the two works - The Concerto for Violin and the Symphony No.4.

Therefore, these are three works that do not directly lead to an area of pious commemoration, but rather to that of a message of consolation which brings a smile among the tears.

I appeal to an exercise of imagination... What could have been said about Tiberiu Soare if the 1989 Revolution had not existed?