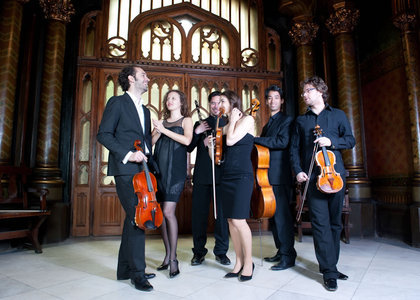 Among the nominated albums there is also the DVD of the opera Ariadne on Naxos by Richard Strauss, with Elena Moşuc in the cast, which was released in June 2014. Among the cast, together with Elena Moşuc, are great names such as Jonas Kaufmann and Emily Magee.

A second album nominated at the 2015 International Classical Music Awards which carries the name of a Romanian artist is that of the Raro ensemble, of which Răzvan Popovici is a member. About this nomination, the violist stated:

I was obviously very glad. The director of the Solo Musica production company in Munich, which has released all the records of the Raro ensemble so far, announced us through a friendly and official e-mail about this nomination. The competition was very intense and it would be a great joy for us to be elected because, as the public also very well knows, big production companies have a great say in the matter. However, every once in a while there are small production companies that win important prizes. We are optimistic! This is the fourth album of the Raro ensemble. It is an album for which we have conceptually chosen music from Central Europe, the Piano Quartet No.2 by Antonin Dvorak, the Piano Quinet No.1, by Ernst von Dohnanyi and a short Trio for violin, cello and piano by Josef Suk.

We are at the beginning of 2015. I would like us to talk strictly about the activity of the cellist Răzvan Popovici. Which are the important events this year?

I think that the first important moment is related to this nomination. We will record the sequel of this album - Dohnanyi, Dvorak, Suk - this time in a distinct formula. We will record the first piano quartet by Antonin Dvorak, the second piano quintet by Ernst von Dohnanyi and the third play will be the Piano Quartet by Josef Suk. It is our wish to finish the repertoire from this area, for it is very dear to us and suits us very well. This album will probably be the official album of the jubiliary SoNoRo edition, which will take place in November in Bucharest, Cluj, Iaşi and maybe other places, but this is not official yet.

The winners of the International Classical Music Awards, ICMA, will be announced on Tuesday, 20th January 2015.