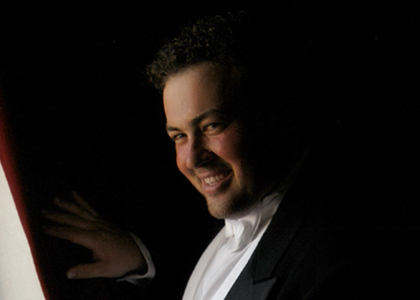 Monday, 19 January 2015 , ora 12.42
Tenor Ștefan Pop made his debut in the role of Don Ottavio from the opera Don Giovanni, by Wolfgang Amadeus Mozart on Thursday, 15th January, 2015. His stage partners, in this production, which was conducted by Alain Altinoglu, on the stage of the Opéra de la Bastille were soprano Tatiana Lisnic as Donna Anna, bass Adrian Sâmpetrean, who impersonated Leoporello and Erwin Schrott was cast in the lead role. Ștefan Pop said about his collaboration with Parisian theatre the following:

This invitation was received two and a half - three years ago, when I was invited to perform Rigoletto, to save a performance of Rigoletto, to be more precise, by replacing a tenor, who had gotten sick, at Opéra Bastille. I sang Rigoletto, the performance was a great success and they sent me the contract for Don Giovanni the following morning - which was a surprise to me and had never happened to me before. I had never sung Mozart before - maybe some arias in competitions, but never an entire role. This is how I sang my first Mozartian role. I made my debut at the Opéra de la Bastille, a theatre which I love very much for its unbelievable acoustics, even though the hall has approximately 2700 - 3000 seats. It is very large, but every sound you make is heard - mezza voce, piano, everything can be heard there. And because of Mozart's masterpiece, which has an amazing music, of course... you can interpret each musical phrase in a special and sensitive way … you can highlight everything at Bastille. I am glad I had the chance to make my debut here - this is Paris, after all, and the hall helps in this regard.

Musically, the main challenges would have something to do with the tessitura and the height of the notes, given the fact that I was coming from a Frankfurtian production of the opera La Sonnambula, by Bellini, where I had sung seven performances and about ten C-notes each time. Well, in Don Ottavio's case, there were mostly A-notes in the first act, but that doesn't mean the role isn't difficult, on the contrary, given the fact that the orchestra is small - it is a Mozartian orchestra - and the way the role is written, especially in the first aria of the first act - all connoisseurs know that the part where the notes F - F-sharp - G appear, you need to interpret it the way it was written, not to change it- then, of course, that is one of the most difficult arias, especially because you are exposed to view and you have to sing piano, mezza voce and mezzo forte, you have to juggle with the nuances.

The connoisseurs say that a tenor who can sing very well the aria Dalla sua pace can call himself a tenor with a good technique. I don't know how good or how bad I sang but at least I know that it did my best. I like, no I love Mozart! Before singing this role, I didn't think I would like it that much, but it is a completely feeling when you sing an entire opera, and we really had the luck to be such a coherent group. We are all young, we all have the same manner of thinking; we spent the New Year together and we had the chance to know each other better then, not to say that two of my colleagues are Romanian too, Tatiana Lisnic, about whom Erwin Schrott, who interpret Don Giovanni, says she is the best Donna Anna with whom he has ever sung; and he has sung Don Giovanni for about 400 times - and Adrian Sâmpetrean too, who sings Leporello. Everybody says that Romanians' strong point is their musicality. I can say and confirm that. In our case, it is a more sensitive matter, it is different from the others. Of course, Mozart gives us value.

I want to take advantage of this opportunity and salute everyone in Romania and I want them to know that, these three Romanians in Paris have put all of their hearts here to prove that Romania too has something to show to other countries - that we too are unique in our own way.

The performance, which had its premiere in 2006, is the first opera production of the famous Austrian film director Michael Haneke. Opera lovers will enjoy other performances in the following weeks, the last one being scheduled on 14th February, 2015.