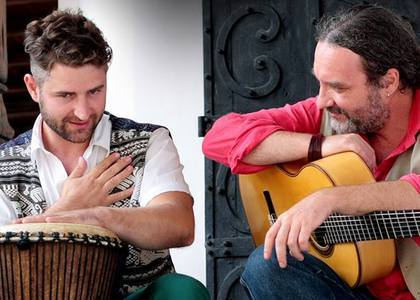 Maxim Belciug and Gabriel Bălaşa - 2B on the Road to Zajj, Friday, 23rd January, at the Peasant Club

Friday, 23 January 2015 , ora 8.58
The guitarist Maxim Belciug - is an artist of a classical formation and choices. He stands out as far as the usual profile of a musician is concerned - he is a Philology graduate and mostly self-taught in the music sphere. But he has gradually and discretely built an outstanding career. Maxim Belciug is a guest of the philharmonics, both in Romania and abroad and he also plays as a soloist within different projects or accompanied by the voice of Maria Răducanu, for instance. And, naturally, he releases albums -Miniaturas Eclecticas, two Beauties, followed by Delights, La Tarara and Troika together with Maria Răducanu, or Emociones and Ad Fontes, in a duet with the violinist Natalia Pancec - these are all titles with philologic echoes. In addition, or especially, we can infer in the intentions of Maxim Belciug an intense lyrical feeling, which is every once in a while interrupted by a succint flamenco abruptness or other classical elaborations. But the game does not end here. On Friday, 23rd January, starting at 21.00, the artist proposes a new project, together with the percussionist Gabriel Bălaşa - ʻ2B on the Road to Zajj'(The artist combined the letters and offers us an anagram of the word jazz.) at the Peasant Club on 3 Kiseleff Bounevard.

Maxim Belciug - always between literature and classical music, it seems that you are also heading on a route that does not exclude improvization. Are we to consider the same about your jazz concert this evening , at the Peasant Club?

We shall think about more than jazz, let us think about ʻzajj'. I have been concerned with improvisational music for a while now, but lately some directions have started to become clear to me. In a nutshell, I can say that we are dealing with two types of improvisations, on the one hand ones that are based on my material, on motifs I invent. And I call them impromptus, on the other hand palimpsests - and who wants to find out more can access Google - they are superposed pieces of writing, and beneath the new writing older ones can be made out. Again, shortly, starting from any possible play in this world, beyond the geographic zone or historical time, I, together with Gabriel Bălaşa, this very talented percussionist, are ʻde-structuring' and restructuring on different levels these plays which were once written, and we also alter them, if you will, at the level of the melody, of the harmony, of the rythm, we are definitely playing with them.

This is not the first collaboration with the percussionist Gabriel Bălaşa. One year ago you also played bossa-nova, tango, still at the Peasant Club.

We came accross one another on the street. He knew something about me, I knew something about him and we concluded that we could try to have a musical collaboration. We discovered that we got alog very well, ad-hoc, in any given situation, on any conditions, which I find astounding. We can ge out of bed, have a flowing conversation, start playing and be satisfied with what we achieve.

We have admired your musical peregrinations - both the classical ones and those less classical: The Delights, The Beauties, Emociones, Ad Fontes, Troika and La Tarara. What should be expect next?

I hope to continue the collaboration with Maria Răducanu, who is very dear to me, and with Natalia Colotelo Pancec, the violinist with whom I have recorded the albums you mentioned. I am preparing a programme of old music, one that I hope to put together with a voice I find extraordinary, the voice of a mezzo-soprano...

Won't you tell us her name?

For now, I think I won't reveal her name. I have already give you something important, that is - what the project consists of. It will be an accompaniment with the modern and with the classical guitar. I won't play the lute or the theorbo. This is a very complex discussion on the authenticity of the instrument. I don't believe in the fury of this authenticity.

In all this amalgam, which would be the personal imprint of Maxim Belciug? What defines you most as an artist?

With all my fondness I have to tell you that the others must decide on this.

Where do you feel the best, in which realm?

If you insist, I will answer by telling you that I love them all almost with the same intensity, however, music will remain my greatest love, but I also love literature and the imitative arts and dance...like a madman.