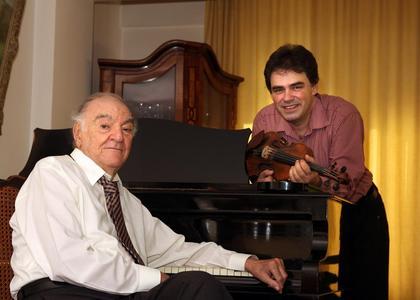 Wednesday, 4 February 2015 , ora 15.21
The pianist Valentin Gheorghiu and the violinist Gabriel Croitoru will present on Wednesday, 4th February, 2015, a Beethoven recital. After a first episode with the complete Sonatas for violin and piano by Beethoven which closed and crowned the 2013-2014 season at the Radio Hall on 27th June last year, the two artists now put forward other three of the ten sonatas created by the great classical composer: The Sonata Op. 12 No. 2 in A Major, Op. 12 No. 3 in E flat Major and Op. 30 No. 2 in C Minor.

You have been on stage in this formula for a long time. What is the secret of this duo?

Valentin Gheorghiu: We like chamber music! Besides, I admire Gabriel Croitoru very much and I enjoy working with him, let alone the fact that Beethoven attracts us both equally in the musical realm, so that we enjoy it. What's more, I appreciate the radio audience, whom I have known for years on end, and I know they also appreciate us. Therefore, it brings us general pleasure to play together.

Gabriel Croitoru: It is an honour for me every time we play together on stage. Besides our friendship, I learn new things every time. Here, now we have these sonatas by Beethoven... at least for me the integral of these sonatas will be a premiere. Valentin has surely played with many people throughout the time. I am glad that I will be among the ones with whom he worked and ... played these sonatas beautifully. This is already our second recital. In the first recital we had the first three sonatas - 1,5 and 8. This time we will play 2,3,7. The other sonatas will remain a project - 4,6 and 10 - and in a last recital we will play the Kreutzer Sonata together with Trio Arhiducele and Marin Cazacu...

Valentin Gheorghiu: Two masterpieces, which, ought to be played more often because the public is always impressed by such a programme. The way we massacrate or execute them, we do not know,but most probably we don't kill them.

I would also like to approach the pedagogical side so, I am asking you how important it is for a young musician to be involved in chamber music projects and at the same time have a musical relationship with a particular chamber music group?

Gabriel Croitoru: Firstly, it is very important for a developing young musician to attend as many chamber concerts as possible, which, I must admit, rarely happens by us... however, we, a few, who are concerned with this aspect, try to do whatever we can to attract as many to this type of repertoire so that they come and learn. Virtually, one has to ʻstealʼ the ways of this craft. Of course it is also taught, but one has to also ʻstealʼ it.

Valentin Gheorghiu: No, no, no… no stealing!

Gabriel Croitoru: I mean that everything you see on stage can influence one of your future performances. You can find interesting aspects, or, on the contrary, you can decide that is not what you want and that you would rather do another version. As far as a stable group is concerned, when you play for a long time with someone, as is our case, you begin to know each other and that there is almost no need for rehearsals, I'd say...without belittling at all our artistic art... that we feel one another... so I hope that the concert will come out beautifully, as usual.

Valentin Gheorghiu: I believe in more than studying music this way, but it also models one's character. There are some soloists who are accustomed to gallop like race horses, on their own, to be rewarded, to enjoy success... Chamber music is more that just that! We make music out of the joy of being together and this also involves some sort of modesty - to accompany the one who is playing the song and give him ground. Chamber music is something far above those grand concerts which are attractive and draw public, it also presupposes a certain mental formation, it is a collaboration we could all use today.

Gabriel Croitoru: I have only one remark to what Valentin has just said. Coming from a performer who for his whole life played as a soloist with the orchestra - it is true that he has also had many collaborations in the chamber music field - this can only crown this repertoire. It is extraordinary to play together with someone who you feel good next to and enjoy music together.

Valentin Gheorghiu: What doesn't sound good is ʻchamber musicʼ. When you say ʻchamber musicʼ it is as if it were something very insignifiant, ʻhome musicʼ would be even worse. This is the way you stuty music, and my friend and colleague plays chamber music and chord music, and I admire him very much. This is considered the highest form of music, this is why Beethoven's last works were string quartets. Who doesn't like Beethoven shall not listen because they won't enjoy it. Who likes Beethoven and doesn't like soloists shall turn the radio off because it will affect their opinion about Beethoven. We can only hope they won't turn the radio off!

Gabriel Croitoru: I am happy to collaborate with the maestro Valentin Gheorghiu once again. I hope to have a large audience at the concert, and we will for sure try to end this Beethovenian periplus by the end of this season.