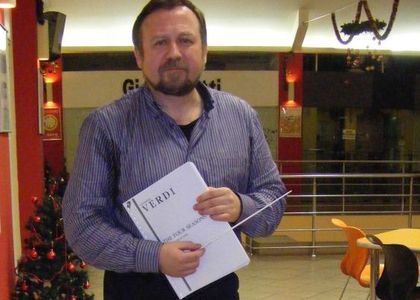 Ladislau Horvath - the Soloist and Conductor of the Radio Chamber Orchestra

Wednesday, 11 February 2015 , ora 9.49
Ladislau Hoevath, who is a musician with a rich international career, the concert master of the famous Italian Maggio Musicale Fiorentino orchestra - where he has been collaborating with the great conductor Zubin Mehta for the past twenty five years - he is making a special guest appearance at the concert the Radio Chamber Orchestra held on Wednesday, 11th February, 2015. The musician will go on the stage of the Romanian Radio Hall as conductor and soloist - alongside pianist Dana Borșan, who is a soloist of the Radio Orchestras and Choirs, and they will perform a programme which contains Romantic French music.

You are returning to the stage of the Romanian Radio Hall. Are you nervous, given the fact that you are performing at home and by that I am referring to the Radio Chamber Orchestra?

I made my debut alongside the Radio Chamber Orchestra … in 2009, when we interpreted a Mendelssohnian portrait, as part of the Mendelssohn's anniversary year, and presenting to the public the Lauda Sion sequence, which is a vocal-symphonic work, which was performed for the first time in Romania. We have had collaboration every year since then. All I can say is that the anxiety reaches a higher level every time, because I am aware of the fact that the public has high expectations; the public is very demanding and my colleagues are very well prepared. I can't fool it, you can't improvise. You must be one hundred percent prepared, or even two hundred percent prepared - as my father used to say, in order to be at peace with your performance.

I believe that choosing this path is something absolutely natural for an artist, who is trying to deem oneself a complete artist. Maybe writing music would be the last step to take, but not everyone has this gift and, besides, you need a serious education - both theoretical and music education - we all know that. But the baton … a colleague of mine pleasantly surprised me by sending me an email with an attached picture, which I didn't remember anything about and which was taken when I was an elementary student at the German school where I was studying. In that picture I was conducting a small choir made of my classmates; I don't remember what I was conducting then, but the picture is very nice. One could tell that my conducting attitude was quite right. I have always enjoyed looking at this picture. Of course, there is also the four-year-contract and the years I spent as the concert master - I remember the high-school years, the Conservatory years and then the years I spent abroad and then here, at the Radio, where maestro Conta and maestro Brâncuși chose me for the position of concert master of the Radio Chamber Orchestra. The Radio Chamber Orchestra was a youth orchestra and we recorded Vivaldi's concertos, accompanied by our colleague Miltiade Nenoiu. I still consider myself an integrating part of the Radio Chamber Orchestra. I started my career here and I feel truly honored to be able to come back.

The first work of this evening's programme is the Concert for Violin, Piano and String Quartet, Op.21, by Ernest Chausson. How did the orchestra react and how is the collaboration with Dana Borșan going?

The original version of the concert was written for a string quartet and soloistic instruments. It is a touchstone for any pianist. It is an extremely difficult work and we had the luck and joy to have Dana accept my invitation to interpret it together, after we also interpreted together the Concerto for Violin and String Orchestra in D minor, by Felix Mendelssohn. The depth with which Dana analyzed the score helped me find a way of communication and an instrumental ensemble, not a just a string quartet. All I can say is that I was stunned when my colleagues asked me if we could stay a little longer and re-rehearse a certain fragment of the score, to study it deeper and polish our interpretation. That had never happened to me that before …

Actually, it had happened when I was working with the Cluj Chamber Orchestra, which I founded two years ago, during the Musical Autumn of Cluj Festival. Therefore, I probably have a good relation to chamber orchestras and a good psychology of asking for a total participation on their side, which makes them more responsible and brings them together and closer as soloists, to a level of consciousness which animate them to participate in the achievement of the same truth. It is a French evening. Maybe there could have been an overture too, but Chausson's work being almost fifty minutes in length, - it is a monument, it has the length of a symphony, it has four movements - we thought that the "Roma" Symphony in C Major, too, has over thirty minutes in length … and that without taking into consideration the idea of minuting, I think the works complete very well the picture of the French music of that time. Bizet's music is very similar to that of Schubert, his symphony is composed in the Classical style, with Romantic tendencies, which anticipate, in a way, the Symphonie Fantastique, by Hector Berlioz; it announces harmonies, characters, the scaffold and the funeral march. On the other side, it brings a Mouline-Rouge-scented perfume, the can-can, the champagne and that French easiness. What we will witness to in the concert hall is the moment when a communion of knowledge takes place between the soloists, the orchestra and the public … Maestro Bugeanu, who was tutoring me in conducting during the '80s used to tell me that when this communion happens it feels as if the wing of an angel caresses the theater or the concert hall, and everyone feels blessed by this caress.

Music must be listened to live. It is a kind of spiritual bread, which is necessary anywhere in the world, at any moment, in every circumstances - whether it is a happy or an unhappy one. I am certain music is what the humanity needs in this moment.