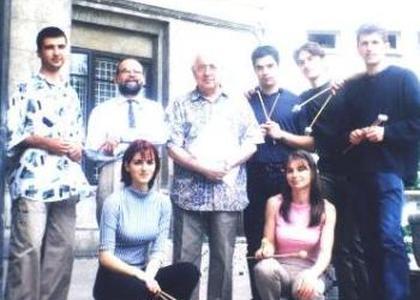 Monday, 16 February 2015 , ora 9.59
The percussion GAME ensemble of the National University of Music in Bucharest was founded on 13th February, 1995 - this is date when the ensemble performed in its first concert. The name of the ensemble comes from the first work written by composer Liviu Dănceanu for it. If I were to describe the ensemble in only a few words, they would be: education, intellectual exercise, the joy of performing together and necessity. This is how percussionist Alexandru Matei describes the ensemble which he has been conducting for two decades. On this anniversary hour, the GAME ensemble is inviting the public to celebrate together these twenty years which have passed since its first performance, at the "George Enescu" Hall of theNational University of Music in Bucharest, on Friday, 20th February, 2015, starting at 19:00. Alexandru Matei is giving us further details about the event:

What are the most important moments which happened during these twenty years?

It is a long story. Of course, twenty years can be a little or a lot of time. I want to define the term GAME somehow, because, you will see how the dots are connecting, in the sense that Liviu Dănceanu wrote a piece of music, whose title is precisely Game, twenty years ago. I hear people around me pronouncing the word game, the term game is correct too; after all, we are in a music area - sound scale and colour scale, especially when we talk about percussion. Liviu's suggestion was to take the title of the first work, which was dedicated to the ensemble. GAME means play. And, the play is very important to me, and to everyone, to every human being, I believe. When we are performing, we cease to exist. And not even one of the concerts which we held during the past twenty years left this area, of playing, but we are talking about an extremely serious kind of play. When you are rehearsing a piece of music, which was written by any kind of composer - I am talking about Ștefan Niculescu's Incantation … play, play, but this is Ștefan Niculescu we are talking about. Yet, Ștefan Niculescu isn't an exception. The game has some unwritten rules … look at the way children play … they play football and if one of them doesn't know how to kick the ball he is forced to leave or he does it himself … there are some rules which need to be followed. And this is why it is so difficult for me to pick a moment. To me, every concert is an event, the members of the ensemble which I conduct are all students and its members are not staying in the ensemble permanently. The students who become members of the ensemble stay with us for about four years, six years or more, maybe nine years, if they study at the National University of Music in Bucharest, and then they leave and others take their place. I think that about fifty students have sung as part of the ensemble for the past twenty years. There is another side of the story, I repeat, it is a student ensemble, but I pay attention to the psychological side of it as well. Even if our rehearsals and our work end on stage, I think these too are like an exam for the students. That means they have to take another exam on Thursday, between 19:00 and 21:00, in front of the public … our jury is the public. And now, since you are asking me about important moments … each concert puts me, as a teacher, and the students in a position where our aim is to perform as well as possible what is written in the score and learn as much as possible. It may be a piece of music of a lower quality, but the students may encounter with this kind of situations during their entire lives, so the concerts are very important. For me, each concert is an event and a reason for joy.

This anniversary meeting with the public will take place on Friday, at the National Music University in Bucharest. What did you prepare for those who will be in the audience that evening?

I wanted for this concert to be a somewhat familiar event. I would be very happy if the public came to the concert in a high number and it would be even better if Bartok's public came too. Do you know who Bartok's public is? It is the one who has specialized studies. Bartok says that a composer must always think of writing music for the public. An instrumentalist must permanently consider performing for the public. Bartok defines the word public as the person who has specialized studies. Whether he is a conductor, instrumentalist or musicologist … he is already specialized and the music must be written and interpreted by specialists for the public. Of course, when we talk about the concerts, during which we are accompanied by the percussion instruments, we are referring to modern and contemporary music in a 99 percent, which is a somewhat difficult language, but not entirely. With almost every concert we held, it has been verified the fact that Bartok's public doesn't leave the concert hall, after it was sung modern and contemporary music, frightened, on the contrary.

And now, I hope for a numerous public and, I am talking about this Friday's concert, I hope as many of our friends as possible, who have been close to the whole GAME phenomena - as I feel it is -, come; because a lot of energy has been put into it, and I am not talking only about myself or about all the generations of students who have sung in it. I am also talking about the composers, musicologists, about all the sides which, after all, define the whole concept of music.