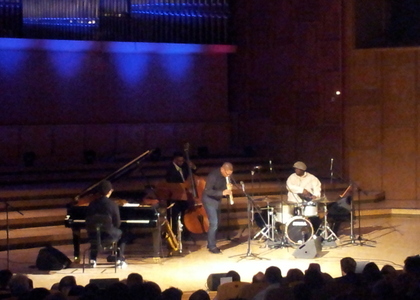 Tuesday, 24 February 2015 , ora 9.12
Ravi Coltrane - who himself is the carrier of an entire music history; his parents, who have been famous jazz musicians for half a century, admired the unequaled Indian sitarist Ravi Shankar (in fact, the esteem the two American musicians had for the Indian philosophy is worth mentioning). A refined musician polished by the experience of a prestigious collaboration , whose elegant, balanced and distinctive musical discourse alternates the good presence he has on stage, alongside David Virreles - piano, Dezron Dougas - bass and Johnathan Blake - percussion, with the discretion he displays when he is not performing.

A wonderful audience: they were excellent listeners and receptive, too; it was a joy to perform for them!

I am certain that you are asked the same questions during every interview you give … Therefore, was it you who chose to play the saxophone or … was it a sort of spiritual inheritance?

When you put it like that, you make it sound as if it were someone else's choice: continuing on walking on the path chosen by those who lived before us, on walking on the path of our past, of each individual's history can be very important ... Of course, everyone's history affects the object of our choice, the way we behave in order to obtain it, it determines what we appreciate, but my love for playing the saxophone comes a little bit from my family's tradition - my parents are John Coltrane and Alice Coltrane, who are both amazing musicians, two remarkable human beings, who have influenced so many people.

Choosing an artistic instrument - whether it is a painting brush, a quill, a violin or a saxophone - you get involved which is an obvious option for you, not for anyone else; there has to be something which you truly love, something which you chose to do with all your heart! You can't let anyone to make the decision for you - otherwise you can't get to an authentic way of working, of living!

Does your choice, which is closer to the free jazz approach to jazz music, define itself through a spiritual concept, rather than an enunciation of the style, a musical technique?

It depends on how we define the notion of musical technique. There is so much complexity in various musical directions and the technical aspects of the free jazz are highly exploited sometimes … but there is also traditional folk music, which is wonderful for its simplicity. To me Music is just Music - it is something which impresses, which takes you to a higher spiritual level! This is what interests me. Technique proves how advanced language is, how free or how well structured - all these are secondary aspects to me, which represent only a small part of the whole vehicle which attempts to provoke emotion. I think that there has always to be an attempt at reaching a higher level, a more intense way of communication, because Music offers us this possibility, the capacity of affecting everyone deeply: both those who listen to it and those who interpret it.

This tour is also related to promoting the most recent album of the ensemble...

It is my last album that we are talking about (the first one to be released by Blue Note Record and the association with this prestigious recording label honours me). It is truly great to make discographic recordings, to embody your ideas, but after you have engraved them you have to move forward; just like a painting - once you have finished painting it, you start working on another one!

When are we expecting the next album?

I am working on it! It has been three years since I started working with this ensemble and I hope we will record something soon.

The ample preamble of the recital of the Ravi Coltrane quartet has brought to the foreground an image of the autochthon jazz through the representatives of a generation, which is nearly thirty years old, well-taught and already experimented, authenticated through its numerous stage concerts and the awards it has won. The evening's programme, which was organized under the Jazz Syndicate Live Sessions logo, proposed a trio made of three interpretative characters, all brought together on the same stage from the desire to captivate the public through their instrumental abilities: Sorin Zlat - piano, Răzvan Cojanu - contrabass and Laurențiu Zmău - percussion.