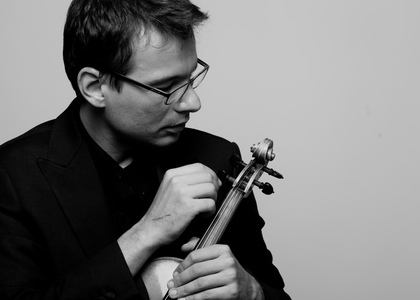 Monday, 2 March 2015 , ora 9.55
Today, 2nd March, 2015, the Embassy of Italy in Bucharest will host a ceremony during which violinist Alexandru Tomescu, who is a soloist of the Romanian Radio Orchestras and Choirs, and journalist Iuliana Anghel, who works for Radio Romania International, will be offered "italophone"credentials. Both of them have been included on the so-called Albo degli Italofoni list of the Minister of Foreign Affairs, which includes notable figures from the cultural, economic, politic and mass-media sectors from all over the world and whose contribution to the development and promotion of the Italian culture and language. Violinist Alexandru Tomescu gave us further details on this recognition, as well as on his future schedule in the following interview:

After you were awarded with the title of Knight of the Order of the Star of Italian Solidarity, now you are going to receive the "italophone"credentials from the Italian state. How did you receive this news, in relation to the list of those who will receive the same credentials?

I received this recognition of my desire to speak the Italian language. I must, of course, specify that I learnt Italian, firstly as a musician, as a violinist, and secondly as an artist who has performed in Italy very often, especially after winning the Paganini Competition in Genoa. Therefore, I learnt Italian straight from the source. It is a great joy and honour to receive such high recognition from the Italian state. It is great that musicians exist; it seems like a natural thing, given the fact that Italian is the language of music, in general, and the language of opera music in particular. Whatever score you open, you will most certainly find Italian words within its pages. This is available even for scores belonging to some German composers, such as Schumann, Beethoven and Mahler. Even if they give certain indications in German, still, the overwhelmingly majority of musical terms are written in Italian. I have always militated in favour that all students with whom I have worked understand what they read there, thing which doesn't happen all the time. It is very important that you understand every word which the composer wrote on the score, because it helps you to understand better the true meaning of what you perform.

What projects do you have prepared?

This year will be one filled with surprise projects. The most important of them, on short term, is the Stradivarius International Tour - this year we are taking this musical message to several countries. We will hold a first concert, accompanied by pianist Raluca Știrăț right now, in March, in London. Then, we will start our Romanian tour, in May and then, in June and July we will take it abroad. My most important project, the extra-musical one, is my daughter who turns six weeks today. It is a truly spectacular change for me and it is obvious that these changes reflect in my performances. And, of course, I am rehearsing intensely for the 2015 edition of the George Enescu International Music Festival, during which I will perform as the soloist of the Royal Liverpool Philharmonic Orchestra, and also alongside my colleagues from the Ad Libitum Quartet in a special recital. And I am also preparing a special project for this autumn.