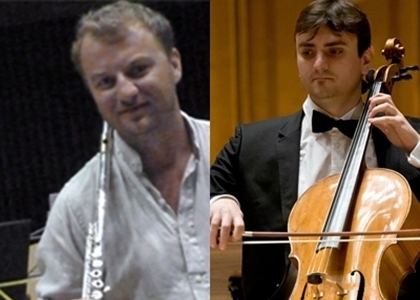 'The Four Quartets' for Flute and Strings, by Mozart Will Be Interpreted on the Stage of the Alfred Alessandrescu Studio

Tuesday, 3 March 2015 , ora 9.58
On Wednesday, 4th March, 2015, starting at 19:00, Radio Romania Music will broadcast live the recital performed by flutist Grațian Papară, violinist Alexandru Marian, violist Monica Goicea and cellist Bogdan Postolache on the stage of the Alfred Alessandrescu Studio. The admission is free for those who want to listen to an all-Wolfgang Amadeus Mozart programme, suggested to the four musicians. We were given further details on the recitals by flutist Grațian Papară and cellist Bogdan Postolache:

Graţian Papară: The quartet doesn't have a certain name or identity. It simply arose from a desire to interpret chamber music, too, not only symphonic orchestral music. We simply transposed this necessity by looking what works are available for smaller ensembles and we liked this idea very much, the idea of interpreting quartet music, especially the Flute Quartet, by Mozart. This is an original composition for an ensemble such as ours.

Bogdan Postolache: I would like to complete my colleague's affirmation. Given the fact that the whole formula is somehow unique, that the flute actually takes the place of the first violin in the ensemble, it was a little difficult to create an independent quartet. Thus, the idea of a few friends, a few colleagues assembling together and making music was our starting point.

Why one hundred percent Mozart programme?

Bogdan Postolache: The complete cycle of the Mozart's Flute Quartets is something special, these are some very complex works, which have different structure and this is why we decided to interpret them in our concert.

What are the difficulties you met when you were trying to integrate the flute in an ensemble like this one?

Graţian Papară: I would call them challenges - more of a technical nature and less of a timbral nature, I think, especially when it comes to these music woks, because the flute has an obligatory soloistic role and this makes its score more vulnerable and it has a timbral variety which, in my opinion, harmonizes very well when it is interpreted by the flute and the string instruments.

Making a parallel with the activity of the Radio National Orchestra, are there any differences between the public who comes to the Romanian Radio Hall every Friday evening and the one to whom you are addressing through this ensemble?

Graţian Papară: I don't think so. I think that music is universally accessible to any kind of public. Especially when it comes to Mozart's music, which is truly accessible to any kind of public, especially during this season, during Spring. Mozart is full of optimism, of good will. I think this season is very appropriate for our recital. You are very welcome to come!