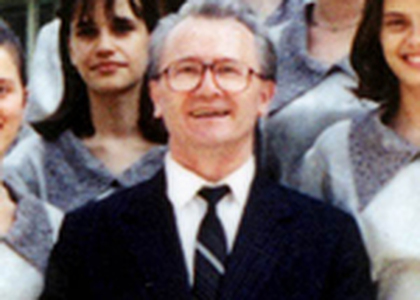 On Saturday, March 7th, 2015, when composer Jean Lupu turns 75, we will wish him a 'Happy Birthday!'. On this occasion, the Symbol Choir will hold a concert on the stage of the Romanian Athenaeum's Great Hall on Sunday, March 8th, accompanied by a book release. Composer Jean Lupu himself provides additional details in the following interview:

2015 is a very important year. You're turning 75, out of which you have spent 55 standing in front of ensembles and conducting them and, from 1990 - that is, 25 years now - you have been in charge of the destinies of those in the Symbol Ensemble. What are the most important moments of this whole span of time?

There have been a lot of important moments from the start of my career as a composer, but I would like to mention that several landmarks in my career include meeting master Ion Românu, in Timişoara and Bucharest, witnessing a couple of rehearsals of the Madrigal Choir with master Marin Constantin, as suggested by my former professor, Ion Românu. It was him who advised me to witness Marin Constantin during the rehearsals. Another landmark, but of a different degree, is the fact that I met in Slatina, where I was assigned as a professor, people skilled at choral chant, people that had practised it. There was a professor, Dorel Georgescu, that had stoked this flame and handed me the torch, and I accepted it elegantly. After that, having moved to Bucharest for almost 40 years, it's actually 40 years this year, I also - again elegantly and reverently - took over the Pedagogical Highschool's Choir from Marin Pâslaru. A choir that was also famous in Bucharest when I took it over and brought it to the Athenaeum. The first concert that took place on the stage of the Athenaeumwas on April 2nd, 1978 and, since then, I couldn't stay away from the stage of the Athenaeum. Every year, I 've had at least one concert, two, even three concerts per year within the George Enescu Philharmonic Orchestra.

But I won't stop at the Pedagogical Highschool's Choir, because, at the same time, I also conducted the Education Syndicate's Cantata Choir, whose album I released; we also did recordings and held concerts, at the Athenaeum as well. From 1990, when freedom of speech was allowed, I founded Symbol, this children's choir, -that afterwards turned into a children and youth choir, since they grew meanwhile, with which I tackled, first of all, a religious repertoire. Just months after founding the choir, we held a concert at the Athenaeum, in December 1990, and since then we have one and even two concerts per year at the Athenaeum with the Symbol Choir.

This concert on March 8th is this year's first, but it will be followed on November 7th by the second one, which will mark 25 years of Symbol Choir activity.

What do you have in store for the Bucharest public in the Sunday concert?

In the Sunday concert, there will be a diversity, a polichromy of songs; first of all, a national repertoire, because that is our mission. Through our status, we obliged ourselves to forward especially national creations; because if we don't do it, who will; and among the national creations that we forward we have religious creations, folk creations and Romanian style composer creations. But we also have works from the international repertoire, as we also have instrumental music, that gives the choir some breathing room, because it's a marathon concert. As soloists, you will hear Maria Diana Petrache, my niece, the daughter of my daughter, Olguţa Lupu and we'll also have our soloists, Andreea Blidariu, Corina Gatu and Daniele Greiere. I and my colleague, Luminiţa Guţanu, will act as conductors for the whole ensemble. You can notice the variety we bring in order to get the public's attention, to get them interested and to keep them happy. Also, I've recently found out, to my surprise, that my former student from some forty years ago, Felicia Filip, offered to sing at this anniversary concert. She was a student of mine at the Slatina Music School and this says a lot, not about me, but about the character of this great lady of the Romanian lyric stage. To be grateful to someone for so many years and, even more so, to prove it, is a rara avis. We know that gratitude is a rare flower, but he/she who both wears and expresses it, over the decades, is an ever rarer individual. Within the concert, my daughter, Olguţa Lupu, will also make an appearance, playing a song by Dvořák on the piano four-hands, accompanied by her daughter. There you go, such a variety that I think that the audience, after almost two hours, will leave relaxed, satisfied and touched by the music.

Indeed, numerous important moments, but this concert is also accompanied by a book release. I would like to ask you what volume are we talking about?

Before the concerts, at 18:00, the release of my book, entitled Confession, will take place in the Athenaeum's rotunda. I confess everything in this book, from the cradle until this very day. I 'committed harakiri', so that I could exhibit myself to today's youth, because I have been a professor and a schoolman all my life. I want to share with today's children and young people, my experience, so that they can avoid what was bad in my experience and learn, if possible, from it. That's how a human civilization is formed, by the future generation taking what's good from the current experience; and that's why we aren't at the level we were 1000 and 2000 years ago. We're on an entirely different level now, because we have made use of their experience and used it for ourselves. That's why I took a risk - 'committing this harakiri' - but it was a risk worth taking for the sake of those who will come after us.

Regarding the book release, editor, writer and cultural representative Florea Firan from Craiova, Mrs. Irina Odăgescu, Mrs. Carmen Manea, the writer of the preface, writer Ion Andreiţă and writer and publisher Victor Ursu wish to hold speeches. There will be important and pleasant moments and I think emotional, as well, on this book's release.