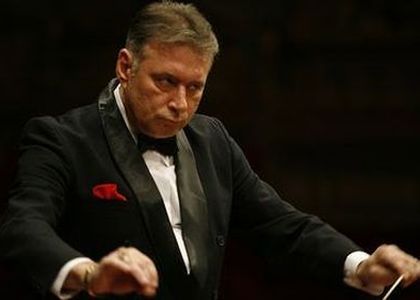 Friday, 27 February 2015 , ora 10.07
The last concert of the month of February of the Radio National Orchestra brings in front of the music-lover public conductor Mădălin Voicu and his son, pianist Mădălin Voicu Jr. on Friday, 27th February, 2015. The latter will interpret a soloistic score of the Piano Concerto No. 23 in A major (K.488), by Wolfgang Amadeus Mozart. The programme also contains theSarabande, Giga and Badinerie, by Archangelo Corelli, and the 'The Queen' Symphony No.85 in B flat major, by Joseph Haydn. It is a special concert, because Mădălin Voicu is celebrating fifty years of artistic activity.

You are celebrating fifty years of artistic activity through this concert. What are the most important moments of this whole period?

It is difficult to say which were probably the most eloquent or important moments. There were quite a few … starting with the age thirteen, when I performed for the first time on a stage, and ending with this evening's concert, which, anyway, won't be last one; a lot of good, important, some of them remarkable things have happened to me in this entire activity of mine, during these fifty years. Of course, in the beginning, as a violinist, I felt the heavy shadow of my father's success, about who we know very well what he did, who he was and what he managed to bring to the violinistic interpretative music and when I don't mean only what he did here, in our country - he, I think, is a member of the World Cultural Heritage - so, we decided together that in my future profession, which would later be that of conductor, I had to be a well-prepared, consolidated, and have good results. My first teacher was maestro Corneliu Dumbrăveanu, and after him maestro Cristescu, then maestro Conta - an important character and a very good friend of our family, and after him Carlo Zecchi and Swarowsky followed. After them it was Celibidache, who was my guide during my career actually, which would become a stable and constant one later.

I have learnt a lot. People think that being a conductor is easy, that it is more of a caprice, a way of expressing yourself emotionally, but, in reality, it is a profession which implies a lot of work and the path to success is difficult. If God and your DNA code give you the best and the most important genes, then things are a little more predictable and the path is an ascending one, if not … well I can work as hard as you want, but I can't leave the sphere of mediocrity. I happy to tell God and my father, if they are together right now, that I see they had someone on whom to focus their attention, and that someone would be me. I think their effort allows me now, after fifty years of activity, of work, of music to find out that I have represented an entire generation and have brought honour to both my name, and the trust I was invested with from other musicians, from my teachers, and from the music critics, and this is of great importance to me. It isn't a pecuniary accomplishment, it is a personal gratitude and a good thing, and a kind of feeling which brings you happiness because you feel that your efforts haven't been for nothing and the things you have done during all these years haven't been useless.

You have talked about your teachers and the conductor with whom you interacted at the beginning of your career. Which of the advice you received from them would you like to share with today's young conductors now?

Things converge. It is important to study, it is important to work, it is important to correct, there are things which you learn in time. I believe that you acquire the essential features - talent, rhythm and musical ear - when you are born, I can't buy them anywhere because they are not for sale. Enescu used to tell Celibidache: Sergiu, success is 90% hard-work and 10% talent. And, of course, Celibidache would reply: Maestro, it is easy for you to say it! But, in general, it matters most to have continuity, it matters to be interested in learning new things, because a symphony by Mozart, Haydn, Beethoven or Mahler … they are all made of musical notes, but one always discover new things inside a symphony and inside the ferment of a symphony or of a music work … and what one discovers there depends on one's age, experience and on one's interest in always paying attention to detail. Therefore … hard work is obligatory in any profession, but if you don't have what is called positive chemistry, I don't think you can reach a higher level than the average one.

Yes, I guess you can say that. I remember that during my first stage appearances, alongside my father, poor him was twice as nervous as he usually was; firstly, for me, and then, of course, he suffered from the constructive nervousness which the stage gives you. Mădălin Jr. is a very talented pianist and I am not the one who is saying it, it is Valentin Gheorghiu and Dan Grigore, there are the people who have kept an eye on his evolution. I am nervous because … , you know, generally artists feel things in a certain way and this doesn't happen only when they are on the stage. It depends on how you feel when you wake up, on how the weather is and on how you are feeling in general. I hope this concert is a proof that I have handed over power to Mădălin Jr., because he is a member of the Voicu family, even if he isn't quite a conductor, but I hope that by walking on this street of tradition and of learning on the fly of a cultural and artistic message, which I hope Mădălin Jr. will be able to do, will prove to have, I think, a good result and to be a good way of thinking. I am not nervous for him, I am nervous for us. Actually, this is a matter which needs to be settled while knowing each other very well. Each one of us has moments when he probably isn't in perfect shape and then we have to study each other's behaviour, to see what one can do to compensate what the other one lacks that evening, but I don't think there will be any issue while we are on the stage and I hope that this evening's concert turns out to be a successful one. After all, among the two events, in the sense that Mădălin is a soloist and I am turning fifty years of artistic career, and there is also my father's celebration, because we marked eighteen years since he went to God on 24th February, so there is another reason to be more sensitive. I think this evening's concert is going to be in accordance with our ambitions and desires. I am very happy to see that the people are coming more and more often to concerts; and not only to concerts, but also to theatre and opera performances. This is a proof that many people refuse to live in a nebula or in a permanent state of agitation and that they are returning to the good and consistent thing and that music, if it isn't the first of them, then it is among the first things which make people feel good.