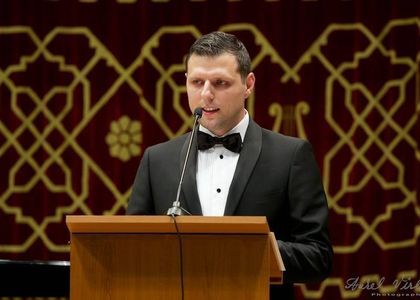 Thursday, 26 March 2015 , ora 9.50
On Sunday, 29th March, 2015, starting at 19:00, at the Radio Hall in Bucharest, the Association for Music, Art and Culture and the Help Autism Association in partnership with the InfoEuropa Centre belonging to the Ministry of Foreign Affairs, the Romanian Broadcasting Society, Kaufland Romania, Floria.ro and Wagner Fine Arts and Stories organise the second edition of the 'COLOURFUL SOUL' event - a charity concert benefiting children with autism. The show will feature three famous names of the international music stage: the violinist Remus Azoiţei and the pianists Mara Dobrescu and Diana Ionescu.

Mihai Stan, president of the Association for Music, Art and Culture, talked to us about the 2015 edition of this event:

I had the idea of organising this charity concert for children with autism after receiving some news. Two years ago I found out that the grandson of some good friends of mine had been diagnosed with autism and I wanted to help them. But at the same time I wanted to not only help their grandson, but also other children diagnosed with autism. And then my friends told me about the Help Autism Association and that is how the 'Colourful Soul' event took shape - a charity concert benefiting children with autism. The first edition took place at the Radio Hall last year, on 3rd April. The guests were the tenor Ştefan Pop, the soprano Rodica Vica, the violinist Vlad Maistorovici and the pianist Ştefan Doniga.

This year, on 29th March, also at the Radio Hall, the second edition of the charity concert is set to happen, and the guests are the violonist Remus Azoiţei and two pianists - Mara Dobrescu and Diana Ionescu.

How did they react to your invitation to participate in this event?

They took it very well. Above all, they are dear friends and great artists, so my proposal was embraced from the very first word. They were very open, they said 'yes' from the beginning, they wanted to come and sing for the benefit of these children pro bono.

What pieces will the audience listen to at the Radio Hall on that Sunday evening?

The musical moments were of course conceived by the three artists, but mainly by the pianists. It is a programme created especially for this occasion, a very attractive one... it was put together bearing in mind that they would be singing for children and so the musical pieces are beautiful and cheerful, in order to convey to the public the idea that, after all, we came here to play and sing, have a good time and at the same time help the little ones. I am allowed to tell you - Remus Azoiţei will be singing the famous Ciaccona, there will also be a Piazzolla moment in the end, Libertango with the three of them on stage - an original moment, two pianists and a violinist. For more surprises, I invite the public to come and listen to a high quality concert at the Radio Hall and at the same time help a child, through the simple purchase of a ticket.

Tickets are available online on www.bilete.ro, or you may purchase them at the offices of the Romanian Post Office, in the Inmedio Shops bearing the bilete.ro logo, in the Germanos Shops and at the Romanian Radio Hall Box Office.