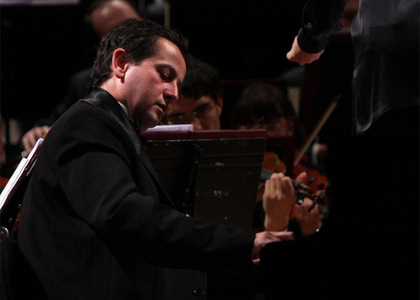 Thursday, 2 April 2015 , ora 13.11
The second concert given by the pianist Horia Mihail within the fifth edition of The Travelling Piano tour will take place in Braşov on Thursday, 2nd April, 2015. The pianist told us about his meeting the symphony ensemble of the town philharmonic.

You will be the soloist of the Braşov Philharmonic, playing Sergey Rachmaninoff's Concerto No. 2, a work which is dear to you. What are your feelings when you return to your hometown?

I am quite thrilled, especially since this concerto is, indeed, very dear to me. Until a few months ago I had only enjoyed it as a simple listener. I made the decision to perform it more than a year ago and now, after the debut in Galaţi, come the emotions of the concert in Braşov. This is a difficult work for any pianist, but the issues can be easily solved as long as the music you perform together with the orchestra and the conductor is full of that poetical feeling without which music in general, and Rachmaninoff's Concerto No. 2 in particular, cannot exist.

This is a new stage. It is true I made my debut in Braşov a long time ago, but it took place at the Dramatic Theatre. In the meantime, the Philharmonic changed several venues where they performed each season. For a few years now, they have been playing at the Patria Hall, a hall which has been recently restored and with which, unfortunately, we have not got used because there are some acoustics problems. However, the professionalism of my colleagues at the Braşov Philharmonic is such, that these shortcomings will not be noticed by the audience.

The Travelling Piano is a special project within the Romanian music universe, destined to bring classical music to places where it had not existed before. Every time, the halls were the same: packed. What is the secret behind the success of such a project?

I believe that every successful project should have a story. But, at the same time, the people who tell these stories have to believe in them; the team we created together with Radio Romania and the Accendo Cultural Association makes these stories believable. I do not have in mind The Travelling Piano alone, but also the other tours we go on - The Duel of the Violins, Enescu's Violin, The Magic Flute. These are stories that bring joy to people and, as you were saying earlier, there are so many places which we reach every year, places where classical music practically does not exist; we try to sow a seed there, hoping that it will bear fruit in the future.

The programme proposed for 2015 is a romantic one. What are the works you will be playing within the fifth edition of The Travelling Piano?

We have already discussed the concerto - Sergey Rachmaninoff's Concerto No. 2. Then, for the recitals, I have chosen to play Brahms - Six Pieces for Piano, Op. 118 and Franz Liszt - After a Reading of Dante: Sonata quasi una Fantasia (The Dante Sonata). I will close the recitals with a set of miniatures, each of them absolutely brilliant: Robert Schumann's Carnaval for Piano, Op. 9.

One of the other objectives of the project is to offer the piano to a concert hall. What town will enjoy a new instrument starting this year?

It is the second travelling piano, the one which remained in Sânnicolau Mare, at the Nako Castle, for three years. This month it will leave its current home and, after an itinerary mostly through Transylvania, it will reach Deva, where it will remain for the next three years.

I hereby invite all those who can and want, to come to the concerts and recitals within The Travelling Piano tour - the 2015 edition. Information is available on www.pianulcalator.ro.