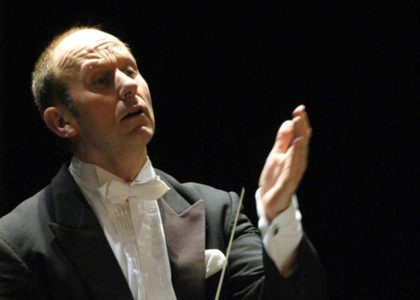 Friday, 24 April 2015 , ora 9.57
Conductor Gerd Schaller is returning to the 'Mihail Jora' studio, to lead the National Radio Orchestra on Friday, 24th April, 2015. Also returning to the stage of the Radio Hall is Bogdan Zvorișteanu, with his Gagliano violin, to perform Camille Saint-Saëns's Violin Concerto No. 3 in B minor, Op. 61. The other works on the playbill are: the ouverture of Giuseppe Verdi's Nabucco and Franz Liszt's Dante Symphony. The members of the Radio Choir, led by Dan Mihai Goia will also be lending a hand.

It's always a great joy for me to be here, to work with this ensemble. The National Radio Orchestra's evolution is interesting. Mainly because there are other musicians in it; this matters because everyone brings something new to the table, and this is the most important aspect. It matters that you have a new vision and a new inspiration for the ensemble that you're leading, and they're bringing those. But the mode of action always stays the same. From this point of view, I feel that I'm always coming back to family.

This evening's soloist is Bogdan Zvorișteanu. What's it like, working together?

We're having a great collaboration. He has a classical approach, which I appreciate and which is extremely adequate for this Saint-Saëns concert. It's important to be able to create the required environment, dominated by a full sound that, at the same time generates serenity. It takes a delicate, transparent performance and Bogdan understood this music exceptionally well and not only this concerto, I'm certain. The whole romanticist repertoire fits him.

You're ending the concert with the Dante Symphony, a work with an interesting history, seldom performed on Romanian stages. What characterizes the work of this composer?

For me, it's interesting seeing that two of Franz Liszt's symphonic works are not that familiar today. I'm talking about the Faust and Dante symphonies. The first is written in a German, classical style, if I may say so. Dante would much better fit the romanticist area. That's what Liszt wanted. I see him as the first European composer. He was born 'at the border', between the east and the west, it's not clear whether he's Austrian, Hungarian, Italian or German... that's why I'm saying that he's rather an European composer. His works have been very important to those that followed him. It has even been said that he went farther than Wagner in his thinking, which I agree. A lot of great names caught up his ideas - Wagner, Bruckner, Richard Strauss. I think that, without Liszt, we couldn't have understood the music that came after him. This Dante Symphony is an extraordinary journey, it can be a challenge for the audience in the hall or for those who listen to the concert via radio. It has a charming magic, with interesting aspects. It reminds of Debussy and then of Wagner. It's extremely colourful and, most importantly, it tells a story! I invite you to watch a dynamic, captivating concerto, with very fine music and special emotions!