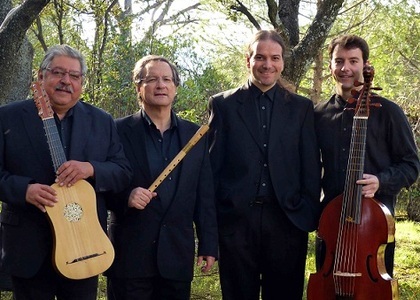 Interview with Alvaro Marias, the leader of the 'Zarabanda' Group

Tuesday, 21 April 2015 , ora 9.39
'Zarabanda', the Spanish old music, ensemble, celebrates the 400th anniversary of the publication of the second book of Don Quixote by Miguel Cervantes by performing a concert to be held, in Bucharest on Tuesday, 21st April, 2015. I have found out more about this event from the leader of the group, the flutist Alvaro Marias.

Alvaro Marias, the 'Zarabanda' ensemble has almost three decades of existence. During this time, have you had another concert in Bucharest?

No, it's for the first time…

And what do you hope and expect from a new audience?

To get in contact with a new audience is always an interesting experience. Moreover, when you have to deal with a country with such an important musical tradition - and we can think of Sergiu Celibadache and Dinu Lipatti - you can't possibly have anything else but respect for the audience.

The idea of this concert is a very interesting one. Could you tell us more about it?

The idea of this concert is to musically illustrate Cervantes' work and era. So, we have made a selection of instrumental works and processed vocal works from the end of the 16th century and the beginning of the 17th century. In reality, what it celebrates is the publishing of the second part of the novel Don Quixote, which appeared in 1615. Next year there will be marked 400 years after Cervantes' death, so, in a way, we will bring together the two important moments bound to the author's name.

We will have some 'peculiarities' in our programme, if we may call them that. We included some Italian works, which at the moment of their publication represented the maximum Modernism for the whole Europe. We made this choice because, Cervantes, as a novelist, was an incredible innovator who revolutionised the narrative technique. This is the reason why we didn't want to only have Spanish music, traditional music played at the royal court, but to project a bit of the artistic avant-garde compositions of the time.

You have sensed my next question…There are many important 16th century Spanish composers, how did you select the works?

We selected the works that we considered as most representative and attractive from the whole repertoire and that we have played throughout so many years. 16th century Spanish music doesn't include that much instrumental music, so we made a selection based on the fact that we couldn't find the necessary singers or other types of ensembles. So, we have a lot of songs written exclusively for vocals, or vocals and vihuela, a genre specific to Spain, played by our group. There are works that are particularly associated with Don Quixote and Cervantes that we play in a manner representative to that era.

Alvaro Marias, you are also a teacher. How do young instrumentalists see the study of old music?

In Spain, the study of old music has been developing since 2000. Until then, Music schools had not paid too much attention to the traditional interpretation of musical works. In 2000, it began to be integrated in the curriculum of the higher education music institutions; that's why the Spanish had a disadvantaged start to other countries, such as, Holland, England and Switzerland, that all started earlier…However, a new generation of musicians specialised in old music started to appear. That's why, after so many years, I decided to found a baroque orchestra called La Gran Zarabanda because now you can truly found such a high quality orchestra in Spain.

Finally, an invitation for the Bucharest public?

I will just tell them that we will perform music that is not very well known and that is absolutely wonderful. Both Italian and Spanish works that we will perform are brilliant old music works. It's neither a Renaissance repertoire, nor a Baroque one, it's somewhere in between. In my opinion, it is Mannerist music, a very modern style for its time.

We will try to perform it in an accurate manner. I have a whole collection of flutes with me too, and all the members of the ensemble will perform on reliable copies of old music instruments.