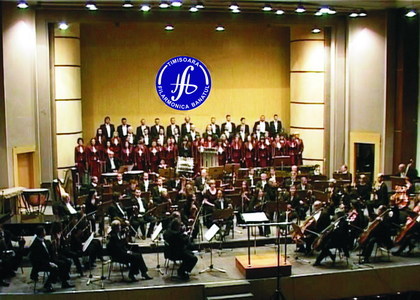 Monday, 20 April 2015 , ora 10.31
On Friday, 17th April, 2015, began the 40th edition of Timișoara International Music Festival. The opening concert took place at Capitol Hall and was performed by the members of the "Banatul" Philharmonic Orchestra, conducted by Radu Popa. The soloists were the pianist Martin Munch, the violonist Gabriel Popa and the violoncello player Filip Papa. The programme contains Martin Munch`s, Adrian Iorgulescu`s and Johannes Brahms` works. Ioan Coriolan Gârboni, the executive director of the "Banatul" Philharmonic Orchestra, tells us a few things about this concert and also about the entire series.

The 40th edition of the Timișoara International Music Festival is being opened by two contemporary opposites. Why did you chose this programme for the opening concert?

For three reasons. First of all, this being an international festival taking place in Romania, I said to myself that we needed the work of a Romanian composer. The work Semnale signed by Adrian Iorgulescu was a success. We played it in other countries as well and taking into account that Romania is a member of the European Union, with all rights reserved, we also have the honour to perfom the work of the pianist Martin Műnch for the first time in a Romanian concert. It is an interesting programme, conducted by Radu Popa and during which Gabriel Popa and the violoncello player Filip Papa, soloist of the Iași "Moldova" Philharmonic Orchestra, will also perform . We tried to interlace the Romanian Cultural Institutes by joining a Romanian composer with a German composer.

Which are the important events that will be hosted at Capitol Hall until 28th May?

The festival is quite long, about a month and a half. We had to extend it, because we had many requests for participation at this festival`s programme. Besides our native conductors, meaning Gheorghe Costin and Radu Popa, we also have guest conductors from Europe and even from America we have a group that is coming and with whom we are going to have a Romanian-American mini-festival. One of the most important events will actually take place next week, when the main flautist of the Berlin Philharmonic Orchestra, Michael Hasel, will conduct our philharmonic orchestra, having an ambitious programme. We have a Romanian composer living in Paris - Horia Şurianu - whose work for the flute and the piccolo has been dedicated to our philharmonic orchestra. The soloists are going to be Ion Bogdan Ştefănescu and Vlad Colar. It gives us great joy that we can extend the festival. In this series` programme we will also have three open-air concerts right in the Opera square; we are going to dedicate one to Antonio Vivaldi`s Four Seasons. We also thought about taking the philharmonic orchestra outside, on the streets, for the inhabitants of Timișoara. We have a hall that could host 900 people and it is filled up at almost every concert. It gives us great joy that they make time to come to these concerts. I thank them for the incredibly big number of participants during this season and I welcome them to follow the events we are going to organize in May - there are going to be sensational concerts. We will have an amazingly efficacious Spring and we hope that they will enjoy it as much as we enjoy seeing them in the concert hall.