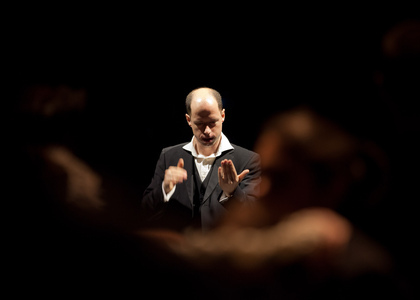 Ralf Sochaczewsky, the Conductor of the Radio Chamber Orchestra

German conductor Ralf Sochaczewsky returns to the stand of the Radio Chamber Orchestra, conducting today, on 13th May, 2015, a concert beginning at 19:00. On the playbill, one can find Wolfgang Amadeus Mozart's Kyrie in D minor, K.341/368a and Cantata Davide penitente KV 469 opuses, but also Joseph Haydn's Symphony No. 95 in C minor. Performing as soloists will be soprano Mădălina Barbu and mezzosoprano Mihaela Işpan, along with tenor Tiberius Simu. Also, the Academic Radio Choir, trained by Dan Mihai Goia, will be participating. About his return to the Radio Camera Orchestra's deck, Ralf Sochaczewsky stated:

I think we're getting more and more accustomed to this formula. The orchestra knows me and trusts me even more. The feeling goes boths ways so there is a very good bond. There are many positive aspects to such a collaboration that make a conductor return regularly to the stand of an ensemble.

This evening's works are some that are close to my heart. I've always wanted to conduct the Davide Penitente Cantata. It's interesting to explore the transformation of Mozart's music from Missa in C minor to these works. Back in the composer's days, the work used to be presented next to one of Haydn's symphonies; not the one this evening , but I think Symphony No. 95 will create a nice performance with Kyrie in D minor - Mozart's second work - since they're in the same tonality.

It's a concert that has voices - 3 soloists and the Academic Radio Choir. How did the collaboration go?

I've heard the Academic Radio Choir for the first time two years ago, in an a capella concert. They pleasantly surprised me. For a radio choir, their way of handling the repertoir was an extraordinary one. From that moment on, I knew that we had to collaborate and that I had to include as many vocal-symphonic works as I could in the Radio Hall's programmes. I enjoy this orchestra-choir formula a lot.

Regarding the collaboration with soloists, I usually agree that dialogue with voices, for a conductor, is the best thing available for his bettering. It is a very lively relationship, that requires a high level of empathy. Tonight's three soloists are spectacular. I've also met other Romanian singers throughout my career and, every time, I've noticed the same thing - the quality of the Romanian vocals.

I would enjoy seeing a full Radio Hall. I invite the audience to listen to a pleasant concert with music by Mozart and Haydn.