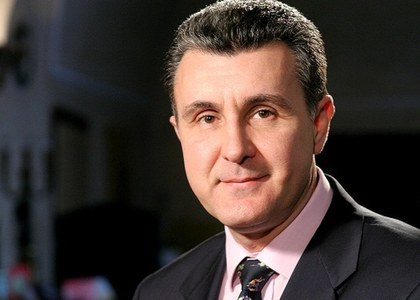 Interview with Prince Radu of Romania

Around the date of the Royalty Day celebration three concerts dedicated to the Royal House will take place: on 7th May, the Royal Choir will perform at the National University of Music in Bucharest; on 8th May, the National Radio Orchestra with the pianist Horia Mihail and the conductor Radu Popa at the Radio Hall; and, on 9th May the Royal Camerata at the Romanian Athenaeum. Radio Romania Music will air a live broadcast of the concert of the National Radio Orchestra on 8th May. The recording of the concert performed on 9th May can be listened to on Radio Romania Music on 16th July, at 19:30.

Regarding these concerts and also the role that music plays within the Romanian Royal Family, His Royal Highness Prince Radu of Romania gives an interview to Denisa Theodoru, a Radio Romania Music's correspondent.

Your Royal Hignness, what is the importance of music within the Royal Family?

None of the family's generations have been strangers to music, on the contrary, each and every generation has had a special relationship with music and musicians, and I'm referring to the resemblance between musical art and the Royal Family, which is that they both address themselves to the soul without any language or time limitation.

The Royal Family is an institution that people only have if they love it. If one does not love it, there is no way they could have it, because it's not a tool that can be used, but simply the privilege of a great love. If one has got the luck of being capable of loving this symbol, then they inherently have it; if one is not capable of loving it, then they do not have it.

It is the same situation as in the case of music. If one is capable of understanding Mozart's music, then they are happy, but if not, they are poor without even being aware of it. Some of the stories that the royal family and musicians have written along history are based upon a very great affection. I mean, I am sure that Queen Elisabeth admired George Enescu for his qualities as a composer and soloist, but she loved him too. And that is beyond admiration.

There is a photo of George Enescu next to Queen Elisabeth, too…

George Enescu developed some sort of veneration towards Queen Elisabeth, whom he found wonderful, providential for Romania. After that, there was the relationship between Yehudi Menuhin and the Crown Princess Margaret. In that case, it was way beyond. It was an enormous affection, and the reasons for his beautiful gestures for the Princess Margaret Foundation were beyond charity. Through the King and the Princess he felt a direct connection with the people. He gave back to Romania what he received from Romania through George Enescu. There are things beyond art. It is simply a spiritual connection. And there are a lot of examples, as musicians from all generations have been loyal to the Royal Family: Virginia Zeani, Ionel Perlea, Nelly Miricioiu, Angela Gheorghiu and Tiberiu Soare, to mention the younger ones only. But from all the other generations, Dinu Lipatti, Clara Haskil, I don't know, it would be unfair to mention only some of them, because there are so many, Eugenia Moldoveanu, Maria Slătinaru, Nicolae Herlea. I think that one of the strongest bonds between the Royal Family and any profession is the one with musicians and arts in general.

Not so long ago, I listened to a song composed by His Majesty, King Michael, in the interpretation of the maestro Dan Grigore at the Radio Hall (author's note - The Royal Concert on 7th November, 2013). It was an extraordinary surprise.

Indeed. And this composition has also a story that matches its greatness. It was written at the Pavilion, and it is an incredible story. Firstly, very few people can imagine the King playing the piano, and ever fewer can picture him composing musical works. The song was orchestrated afterwards and the arrangement belongs to Ioan D. Chirițescu, and I think it happened in 1941. The copy of the manuscript that we have at the Palace has got the title Elegy and then the year 1941, which were both written by the King himself.

As usually, His Majesty did not tell anyone that he was the one to compose it. The only one who knew he had composed it was the composer Chirițescu, who helped him afterwards.

Likewise, when he left, on the night of 3rd to 4th January, 1948, the manuscript was left behind somewhere at the Pavilion, on his piano. And likewise, nobody knew about this, except for whoever found it there, but most probably they were not searching for music works when they commandeered the castle.

When the King and the Queen were on their honeymoon in Athens, at the Tatoi Palace where they had been invited to go alone, while the family remained in the city, the Queen overheard somebody playing the piano, and as she knew that there was nobody in the house except for the King, she ran to the window to have a look, because she imagined that he was the only one who could have played. And it was him indeed.

Her first surprise was that of seeing him playing the piano. She was not aware that he dedicated himself to this occupation.

Then, her second surprise came when she asked him what song that was, and his answer was 'I have written this song'. And afterwards, another formidable thing was that the King had never told the Queen about, and the Queen did not mention it to anyone else until they both wrote their book in the year 2000. That was the first time when this brief episode at the beginning of their lives together appeared in writing. And ever since, from 2000 to 2014, we've been trying to find the musical manuscript, the score, but we have not managed so far. And then one day, the director of His Majesty's house showed up with it. Somebody who had probably read the book or who had heard an interview on the radio or on the television searched for it at the National Archives and found it, and now we have it.

It is the third year when the Royal Concert is organized by the Romanian Radio Broadcasting Corporation around 10th May. Do you own good memories from the first two Royal Concerts?

Yes, I carry very good memories because the Radio is probably the only mysterious mass-media institutions in the world. Think about when in the evening you look out through the window, watch the lights of the city and switch on the radio; there is something in the air that you can find neither in the images nor in the written documents. The radio leads off the way to a kind of enigma and I'm sure this is one of the motifs why many people stay close to the radio in our days although there are so many other alternatives.

I also have in my mind a lovely memory due to the fact that the opening of the Royal Concerts event was for me a great surprise. The Royal Palace wasn't mentioned, it wasn't our proposal but an unanticipated gift we received; it is something you can't just forget; and it is something that brings more excitement.

And in the third and last place, I appreciate that there was an impeccable artistic quality. They weren't some episodic or festival performances, but a gathering of beautiful artists as the Romanian Radio National Orchestra and Choire with their long before established reputation along with other good reputed guests. I remember the great Romanian conductor Christian Badea who is at the peak of his interpretative energy and owns a great deal of creative forces; Mihaela Martin, whom I listened to in this live performance after a long time; I had not listened to her like this since I was a student; and I remember the other artists, as Dan Grigore who organized this recital you are interviewing me about; this year the gallery of the musical personalities is still replenishing.

This year another Royal Concert will be organized at the Romanian Athenaeum, where the Romanian Royal Camerata will perform; this ensemble has been constantly growing and I was wondering how you expect this concert to develop each time?

There is an array of Royal Concerts organized at the Athenaeum, the one on 10th May representing a part of a season in contrast with the only one performed at the Romanian Radio Hall. Their name, as Royal Concerts comes from the fact that the performances are interpreted by the Romanian Royal Camerata not because they are held on 10th May. The concert organized on 10th May is the last from a series of five performances scheduled in this season.

The way these children have developed is another amazing reason to be proud of. In 2009, the year this group was formed I only believed this was going to be nothing but a collegiate commendable enterprise. I knew they were conservatory students, but they had just started their musical careers; and I couldn't imagine that they would reach such a virtuoso level that would settle them now among the great contemporary musicians. Now they perform together with renowned soloists and conductors in the world and I am very glad because of this.

If you didn't know anything about Romania and would walk into the Athenaeum, you would understand it represents the Romanian nation because it has its essence into the ground it stands on. I believe it is much more than music. This is the reason why the Royal House is so related to the Romanian Radio Broadcasting Corporation and the George Enescu Philharmonic Orchestra.

In the attached audio document related to this article you can listen to two performances recorded during the recital in which the piano player Dan Grigore performed at the Radio Hall , on 7th November, 2013: the Royal Anthem and Prince Michael's Elegy, whose story is narrated by Prince Radu in the interview.