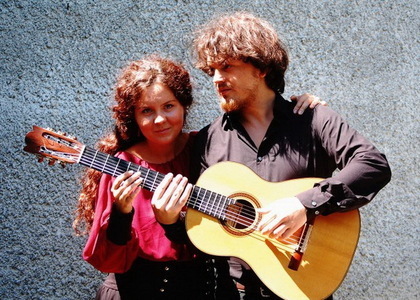 Wednesday, 6 May 2015 , ora 11.37
Every Spring, on the strength of the multiple season's tradition, the public is invited at the Romania Radio Hall, to meet the Romanian young musicians who will go on writing the history of our musical stages. The winners of the 'Road to Celebrity' Vth edition competition are invited to perform as soloists today, on 6th May alongside the Romanian Radio Chamber Orchestra conducted by Cristian Brâncuşi - the piano player Iulian Ochescu, the bassoon player Mihai Boboiescu and the Duo Kitharsis ensemble, with the two guitar players Alexandra Petrişor and Dragoş Horghidan. The concert's programme, broadcast live by the Radio Romania Music starting at 19:00, comprises compositions by Robert Schumann, Carl Maria von Weber and Mario Castelnuovo-Tedesco. The members of the Duo Kitharsis ensemble spoke about their collaboration with the ensemble conducted by Cristian Brâncuşi:

Dragoş Horghidan: The Concert for Two Guitars and Orchestra Op. 201 by Mario Castelnuovo-Tedesco, is to be performed for the first time in Romania; so, it's going to be an initial performance in Romania, although it was composed in 1962. Our experience indicates that everything will be all right. The conductor is open-minded and so is the orchestra particulary because it is something new in Romania.

Alexandra Petrişor: It is an honour for us to perform along with the Romanian National Radio Orchestra as it is our first performance of this kind and mainly because it is a radio orchestra…People have welcomed us heartily.

Dragoş Horghidan: The Romanian orchestras have already performed guitar concerts - the Concierto de Aranjuez by Joaquin Rodrigo, the Madrigal Concert for Two Guitars, as well...I can't tell whether Concerto Andaluz for Four Guitars has already been performed, but the Romanian people are familiar with the guitar and orchestra concerts. This isn't an innovation, but as far as we know this very Concert for Two Guitars and Orchestra composed by Tedesco has never been performed so far. We hope we are right.

At first glance, preparing for this competition seems to be more arduous for you because we are talking about an ensemble not an individual soloist. How was it for you to participate in the Road to Celebrity Competition?

Alexandra Petrişor: First of all, it happened that I was on Facebook one day and I saw the competition being promoted - that happened last year - and we had the insight to participate, so we signed up and started working on it. We had already performed in other competitions and had achieved good results, so it wasn't quite a surprise; as for the rehearsals, it all happened fairly natural - we practised from morning till evening.

Dragoş Horghidan: I would add up that for us, 2014 was really full of competitions. We attended the Cycle de specialization en duo de quitar classes in Strasbourg. Actually, as we were studying only the guitar that allowed us to study every day a lot, without having any other responsibilities. So, in order to fructify our work we decided to participate in the competitions. This was to certify our hard and qualitative study. In 2014 we participated in seven competitions and we achieved satisfactory results in five of them; the Road to Celebrity Competition ranks among them. The prizes awarded in this competition were the most consistent ones.

Alexandra Petrişor: These are the most instrumental and prerequisite activities for a musician who goes on a tour as we did last summer - Music in the Romanian Palaces - at the Peleş Castle, Mogoşoaia Palace and at the Marincu Palace in Calafat and we felt that the Road to Celebrity really rendered high opportunities for the young musicians.

Dragoş Horghidan: In addition, the chance to perform in an orchestra is very rare for a guitar player because the Piano and the Violin School have priority in Romania - and I'm not taking this in bad, on the contrary, this is quite a good thing. Because the Piano and the Violin School have an old tradition, these instruments come first and they are definitely esteemed. For the piano players and violin players it is natural to perform in an orchestra, while a guitar player has to catch up with this branch. It's not very difficult to obtain finances in order to organize a guitar festival, but it is hard to bring great musicians…

Dragoş Horghidan: We would like to emphasize that, as the result of our performing into these competitions, we made use of all our prizes and released an album. The prize we were awarded in the Road to Celebrity Competition, which consisted of 500 euro, helped us a lot with the recording of our album, which I hope will be released this month.

Alexandra Petrişor: We were told that around next week we'd receive a few copies of our CD.

In conclusion, could you please give a message to the audience - how should the spectators perceive this concert?

Dragoş Horghidan: First of all, I think that Tedesco created this concert for everybody, not only for the connoisseurs or experts, as it has often been considered . It's not that I'm not going to a symphonic concert because I'm not able to understand the music performed there, because I haven't studied it or because it is something too abstract, but precisely because he composed it for two guitars - a very popular instrument. If you ask a child to name an instrument he would like to play, he will tell you he would like to play a piano or a guitar. Therefore, the fact that he composed it for guitar means that it addresses all the people and the music lovers of all musical styles and I would really be glad if all the Romanian Radio Hall were large enough for all the Romanians so that they could gather up there.

Alexandra Petrişor: I want to mention that Tedesco composed this concert after returning from Mexico because he was so thrilled with the culture and the traditions of this country. He wrote this concert to pay homage to Mexican music, somehow; the third part of the concert is named Rondo Mexicano and it comprises influences from the Mariachi music - fiesta, cheerfulness and happiness.