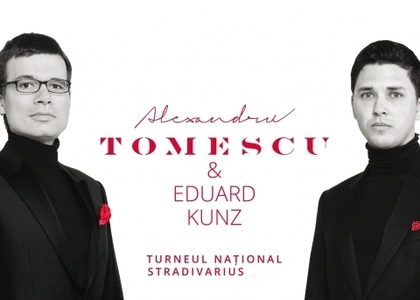 Monday, 27 April 2015 , ora 11.40
On Sunday, 3rd May, 2015, violinist Alexandru Tomescu will perform the first recital of the Stradivarius International Tour. The 2015 edition dedicated to the memory of George Enescu and will make its début at the Sinaia Casino. The violinist stated the following about this year's edition of the Stradivarius International Tour:

I will begin a completely out-of-the-ordinary tour, whose name will be "Stradivarius - ENESCU EXPERIENCE" - a tour during which I will perform alongside pianist Eduard Kunz the complete cycle of George Enescu's piano and violin sonatas. A musical work, which is very dear to me, the Fiddler, is also the opening musical work of this tour. I didn't choose George Enescu by mistake; this year, next week, to be more precise, on 4th May, we are celebrating the 60th anniversary of his death.

This complete sonata series represents a very humble gesture of reverence of a Romanian musician towards a genius. George Enescu was a genius and who knows how much we will have to wait until someone like him is born again. And I am not talking only about his creative force and his qualities as a musician, but also about his human qualities, which impressed those who knew him and upon whom he left his mark.

A major completion of this year's tour is the traditional social campaign, which takes place every year during the Stradivarius International Tour and whose purpose this year will be to collect funds for the restoration of George Enescu's house in Mihăileni, the commune where George Enescu's mother is buried and where he composed many of his works. It is not only about the restoration of his house, but also about its turning into another "George Enescu" Museum, and the creation and opening of an international cultural centre in Mihăileni, in collaboration with the Pro Patrimonium Foundation, which would be a place where we could offer the people living in the area - the children, especially - a viable cultural alternative.

I am aware of the fact that this project is extremely risky and bold, but, somehow, I remember that the first classical music tour, financed through private funding, was regarded in the same way nearly ten years ago, yet, and it worked. I have all the confidence in the world that this project will succeed in proving that this spirit of solidarity is alive among Romanians, solidarity inspired by a beautiful idea, and I hope with all my heart that it will also inspire others to follow this example.