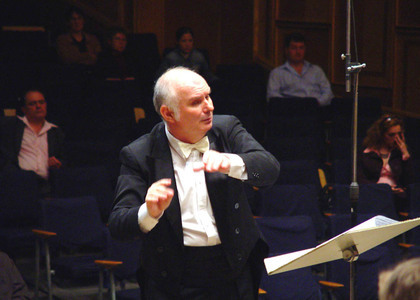 Monday, 22 June 2015 , ora 14.24
The Romanian Radio Academic Choir, which is a landmark of the Romanian cultural life and an appreciated ambassador of Romania abroad, has reached the beautiful age of 75 in 2015, and has become the most long-lived vocal-symphonic Romanian ensemble. After its first anniversary with its a cappella performance, which took place in February and was dedicated to universal choral music, the ensemble and its conductor, Dan Mihai Goia, suggests a beautiful concert consisting of Romanian music, on Thursday, 30th April, 2015.

The Romanian Radio Academic Choir is celebrating its 75 years of existence with a second concert dedicated to Romanian music. Why did you choose this kind of repertoire?

I conceived this cycle of tree well-defined components. We performed universal music in February - the most beautiful pieces of music we have performed over the years. We are presenting Romanian music to the public this evening. And the third and also the final concert in this series will take place in November - the Romanian Radio Academic Choir and its guests; we will talk about them at the appropriate time.

I conceived this evening's concert in 2013, when all six composers, whose works I wanted to include in the concert were still alive. Sadly, maestro Radu Paladi passed on in 2013 and Vasile Timiș in 2014; Adria Pop lives in Cluj and has a very laborious activity, and the three ladies of the Romanian choral music, and not only of this kind of music, but I am referring to "choral music" because we have had a very close relationship ... so, I am talking about Irina Odăgescu-Țuțuianu, Felicia Donceanu, and Cornelia Tăutu.

These six great choral music composers wrote some excellent, very diverse and distinctive works when it comes to language, message, and interpretative experience. To us, their names have a special resonance and we got closer to them not only due to the musical and compositional perspective, but also due to our profoundly genuine humane collaboration. Actually, we are re-interpreting works which we have been performing since 2001 and some of them until last year - a good example would be The Lord's Prayer, by Irina Odăgescu, which we are interpreting for the twelfth time this evening.

I don't know if the twelve works we decided to interpret this evening have anything to do with the Gospels, but they represent some landmarks to us, some great interpretative trials. I, for sure, am at the end of my artistic career and I would like to share, not in the form of a testament, but speaking from an interpretative point of view, the maturity I have reached over the years and I hope that, accompanied by the members of the Academic Radio Choir, we have prepared some referential interpretative versions, which will give joy to the mind and soul of those who come to the concert hall, as well as the mind and soul of those who will listen to us on the wavelengths of Radio Romania Music and Radio Romania Culture.

We are talking about a programme where religious works entwine with folkloric ones. How is this crossing possible?

Indeed, it is an interesting repertoire. Actually, pretty much every concert I have conducted during my fifteen years as a conductor of the Romanian Radio Academic Choir has been an entwining between the religious and the profane. I think these two - religion and folklore - represent the roots of the true artistic creation belonging to every nation in the World, and both, if they are accomplished - from both a compositional and interpretative perspective, with maturity, and while paying attention to the depth of the soul and of the mind - they will reverberate, because they represent genuine concepts.

Even the compositional language used in creating these works is extremely diverse. In folklore we encounter edifices specific to the Byzantine tradition, we encounter heterophonic moments, moments of formidable lyricism and cantability, candour and gentleness; we encounter overwhelming, dramatic harmonic structures, which have a formidable expressibility … There are various moments and I wouldn't want to do a structural analysis of the composition' each work is a piece of creative jewellery, which sometimes targets even the compositional geniality, and our job is to interpret it at the highest level of quality with our mind, soul, voice and even the whole body, so that our message reaches those who listen to us.

I think it would be a sin for the public not to listen to such a concert - either on the radio, or seated in the audience - a concert consisting of Romanian music. First of all, I am not sure how many ensembles aim to a concert as such at present. I repeat, there are capital works, works of immense beauty and true treasures of Romanian spirituality, whom would be a sin not to listen to. There are true treasures in the Romanian creative portfolio and it would be a shame not to listen to them. The portfolio of Romanian artistic creation contains true valuable compositions we must listen to, understand, promote and, thus, become better people, wiser people who get closer to the concept of being a Romanian.